The best time to plant a tree was twenty years ago. The second best time is now. (Chinese Proverb)

Irvington has always been a leafy neighborhood. The founders of the community had an expectation that residents would plant trees. Some of those early trees still shade the narrow streets. Century-old maples, oaks, catalpas, and numerous other species can be found throughout the area. When Rodolfo (Rudy) and Christina Garza purchased the bungalow at 44 South Arlington Avenue in 1970, they noticed that the front yard was bereft of trees. While they did have a beautiful persimmon tree in the backyard, the couple wished for some shade or beauty along Arlington. In 1974, they traveled to visit a friend's property in Trafalgar, Indiana with the idea of digging up a few saplings for their Irvington property. Christina wanted dogwood trees, but they couldn't seem to locate any so they settled on two small white pine trees. They loaded the two evergreens atop their long Ford station wagon and drove home. Mr. Garza planted the pines and over the years the family marveled at the fast growth of the trees.

Mrs. Garza particularly liked to use the branches and pinecones to decorate the home at Christmas. Over the years, their children enjoyed racing around the trees and in some cases jumping over them which is why one tree is shorter than the other.  As the trees matured, the utility company asked the Garzas to trim some of the lower branches so that the water meter could be read properly. By 2021, both trees were still standing at four and five-stories tall despite some harsh winter winds and strong summer storms. The half-a-century-old trees could live for another fifty to one hundred years.

I wish to thank Rudy and Christina Garza, Regina Garza Ruopoli, and Jon Oliger for photos and information regarding this post.

Posted by Bill Gulde at 9:03 AM No comments:

Rodolfo (Rudy) and Christina Garza purchased the modest bungalow at 44 South Arlington Avenue in 1970 and remained for the next 47 years. The Garza family photos not only capture important moments in their lives, but the photographers also inadvertently documented structures along that street that are now lost to time.

Lost Irvington--39 South Arlington Avenue:  Likely snapped in the winter of 1975, Sonia Johnson posed next to the pine tree planted by her father, Rudy Garza, in the front yard of their home at 44 South Arlington Avenue. Behind her, you can see a car driving south along pre-widened Arlington Avenue. The most visible home in the photo belonged to her Grandpa and Grandma Willett of 39 South Arlington. The small cottage was likely built in 1905, for Charles Wambold, a painter and "paper-hanger." Numerous families lived in residence over the years including the Armstrongs, Vannettes, the Reeds, the Coreys, Kelleys, and the Willetts. For many years, the house sat empty and appeared abandoned. It was demolished sometime after 2007.
The Roaring Twenties Meets the 1980s:  Sisters, Sonia Johnson and Regina Garza, posed in their front yard at 44 South Arlington Avenue in the winter of 1980. The fashionable teens both attended IPS #57 and later Howe High School. Behind the young women, a garage belonging to the Willett family at 39 South Arlington is visible. A small news item in the Indianapolis Star reveals that Alfred L. Reed applied for a building permit to erect the garage in September of 1925. The structure has since been razed.
(photo courtesy of Garza family)
A Quiet Field:  Lots 10 and 11 of Tilford and Thrasher's Addition are both empty in 2021. Fireflies, bees, and many birds now call this plot of land "home." Little evidence of the house and the garage once located on the land still exist although some yarrow planted near the front of the cottage blooms without fail and landscape rock near the former garage still rests along the back alley.

Hulda Paulina Axberg of Karlstad, Sweden bade goodbye to her father, step mother, and numerous siblings on May 4, 1906, as she traveled alone to the coastal city of Gothenburg to board a ship bound first for Liverpool, England and then for the United States. Like millions of other immigrants, she arrived at Ellis Island, New York with little money but with hopes for a new life. Her older sister, Elin, who arrived earlier, served as her sponsor. She listed "servant" as her occupation and in fact, she would serve as a domestic in various American homes throughout her life.

Three years later, another Swede, Hilding Urban Hendrickson, departed from the small coastal Swedish town of Simrishamn where his father served as a ship captain.  Unlike Hulda Axberg, nearly all of Hilding's siblings immigrated to the United States. Some of his brothers settled in Rochester, New York, while he and his brother, Francis, moved to Indianapolis. Lars Hendrickson, the father of Hilding and Francis, insisted that his sons have a trade. Both Hilding and Francis listed "tailor" as their occupation when they arrived at Ellis Island.

The Swedish community in Indianapolis in the early twentieth century was not large so it is not surprising that Hulda Axberg met Hilding Hendrickson as they had much in common. They married on May 2, 1914, at the Woodruff Place United Presbyterian Church. Mr. Hendrickson was just beginning to build his reputation as an outstanding tailor. He and his brother opened a shop in downtown Indianapolis providing an income for the two young immigrants and their wives. Hilding and Hulda rented numerous homes on the eastside of Indianapolis before purchasing a beautiful home at 824 North Rural Street.  The couple celebrated the arrival of their two sons, Robert in 1916 and James in 1918. Both young men attended and graduated from Arsenal Tech High School.

When World War II erupted, Hilding and Hulda, like millions of other American parents watched and likely fretted as their sons went into that conflict. Robert Hendrickson served in the European Theater as a bomber pilot over Germany while James Hendrickson had the grim task of assisting with the clean up of Nagasaki, Japan after the city was destroyed by an atomic bomb.

With the war over and their sons now out of the house and starting their own lives, Hilding and Hulda sold their Rural Street home and moved into a small cottage in southern Irvington at 406 South Butler Avenue. Hilding's brother, Francis and sister-in-law, Elizabeth Hornbrook Hendrickson, lived nearby at 47 Whittier Place. Hilding and his brother dissolved their tailor shop and he then worked for Blocks Department Store for twenty years.

At their little cottage on South Butler Avenue, the couple hosted family celebrations. Donna Sanderson, the granddaughter of Hilding and Hulda Hendrickson, remembers the delicious smells emanating out of the kitchen as her grandmother baked some Swedish specialities. She also remembers staying in the attic-turned-bedroom and listening to the rain hit the roof lulling her to sleep. The tall grandfather clock visible in the photos sat in each of the Hendrickson homes.

In their elder years, the Hendricksons moved to 958 North Hawthorne Lane in northern Irvington in 1962. They likely owned the home before that date and they seem to have rented the residence to Swedish natives, Ellen and Glenn Bertelsmann in the early 1960s. Mrs. Bertelsmann was Hulda's sister. In her later years, Hulda worked as a domestic for the Ruckleshaus family in Indianapolis.

On May 3, 1964, the extended Hendrickson family gathered at the Hawthorne Lane home to celebrate the fiftieth wedding anniversary of the Swedish couple who took a chance on the United States. Five years later, Hulda Axberg Hendrickson, the immigrant from Karlstad, died in 1969. Tragically, Hilding Urban Hendrickson, the tailor from Simrishamn, met his ending in an auto accident after being struck by a train at the dangerous intersection at Sherman Avenue and Massachusetts Street in 1970.

Credits:  I wish to thank Donna Sanderson, the granddaughter of Hilding and Hulda Axberg Hendrickson. Her attention to detail and family history documentation made this an easy post to write.

Posted by Bill Gulde at 5:50 PM No comments:

Francis and Elizabeth Hornbrook Hendrickson purchased the boarding house located at 47 Whittier Place in 1921. Mr. Hendrickson was a successful tailor in downtown Indianapolis along with his brother Hilding Urban Hendrickson. The brothers, both born in Sweden, operated a successful business for decades. Hilding and his wife, Hulda Axberg Hendrickson, also lived on the east side of the city in several houses including two Irvington homes at 406 South Butler Avenue and at 958 North Hawthorne Lane. 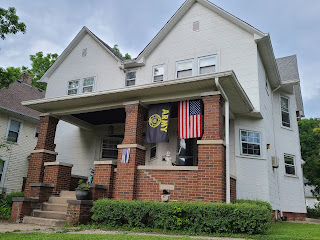 In the late 1990s, members of the Hendrickson family cleared out the old boarding house on Whittier Place and had a sale.  Someone loaded many historic family photos into a box and placed them on a table. Mark Capes, a local resident, purchased the box thinking that there might be photos of Irvington's past. He protected the photos for several years and then allowed me to see them. I encouraged him to donate the box to the Irvington Historical Society, which he generously did several years ago. Recently, archivist, Paula Schmidt, asked me to revisit the collection. Who are these people? Where were these photographs taken? Are there Irvington shots in this collection?

Most of the photographs did not have names, but several listed the studio and the city where the images were snapped. The vast majority of the images date to the late nineteenth and early twentieth century. The Hendricksons could be found in Sweden, Rochester, New York, and in Indianapolis. Of course, many of the images belonged to Elizabeth Hornbrook Hendrickson, Francis Hendrickson's second wife. She came from the Moundsville-Wheeling, West Virginia area. We are still learning about her family, but both she and her sister, Bertha and her brother, Henry also moved to Indianapolis.

While there was not one image of Irvington in this vast collection, the photographs still tell a story of two Irvington brothers. As we learn more, we will update this post. Below is a sampling of what is in the collection.

Posted by Bill Gulde at 8:58 AM No comments: