Who Lived Here? An Otolaryngologist and His Family Along Irvington Avenue

Dr. Daniel Shimer Adams and Ruth Brown Adams moved into the large house at 59 North Irvington Avenue in 1924. The 48-year-old ear, nose, and throat doctor worked downtown and had lived in a few other neighborhood homes before finally settling down on Irvington Avenue. The couple were married in Wanamaker in southeastern Marion County in the spring of 1910. They dwelled in that region of the county during the early years of their marriage, but eventually moved to homes along both Audubon Road and East Washington Street. Dr. Adams was the grandson of William and Susan Shimer, who were prominent farmers along Brookville Road in southern Irvington. Mrs. Adams was an active club woman and frequently hosted the Irvington Chautauqua Reading Club at 59 Irvington Avenue.  Society snippets from the Indianapolis Star revealed that she was also quite active with the Butler University Alumni Association. The couple had two children, George E. and Mary E.  The family dwelled in the large house throughout the Great Depression and moved from Irvington in 1941. Dr. Adams lived until 1964 and Mrs. Adams passed away in 1976.

Sometime in 1926 Dr. Adams sat for this photograph, which he submitted to the publisher of Fellow Citizens of Indianapolis. 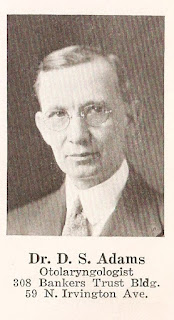 Posted by Bill Gulde at 6:49 AM No comments:

On Christmas morning 1944, Chuck and Jane Vogt bounded down the stairs of their small cottage at 5733 Oak Avenue to see what Santa had delivered. It had been a difficult month for the nation as American troops fought the Germans in the Battle of the Bulge. Their parents, Betty and Charles Vogt, likely listened to the radio each night with worry as news of the battle reached Irvington. Some local boys would not survive the onslaught including Robert Dickerson of 818 North Arlington Avenue. But that morning, for at least an hour or two, the Vogts like millions of others could set aside their concerns and spend time together.

The Paveys Move to Irvington

Jacob and Clarissa Pavey moved to Irvington in the fall of 1909 so that their children could attend Butler University. Mr. Pavey, a retired farmer, owned land in both Boone and Hancock Counties before relocating his wife and three children to 37 South Hawthorne Lane. They rented the house and later remodeled or rebuilt a home at 5338 Julian Avenue. The Paveys had married in 1886 in Boone County. There was a sizable age gap between the pair as Mr. Pavey was fourteen years older than his wife. They raised three children, Mary, Jesse, and Lena, all of whom went on to prominence in their fields of study.

The historic images are courtesy of the Irvington Historical Society. To learn more about the Society, clink on this link:  http://www.irvingtonhistorical.org/
Posted by Bill Gulde at 11:34 AM No comments:

Who Lived Here? A Brick House for a Brick Salesman

In 1923, Jacob Halleck Zinn and Mildred Keeport Zinn moved into their brand new brick bungalow at 5435 Hibben Avenue. The couple had previously dwelled at 139 South Ritter Avenue. Mr. Zinn had made a comfortable living as a clay salesman for the William Dees Company. Contacts in that industry likely gave him the opportunity to build the only brick single-family house along Hibben Avenue. Prior to moving to his new home, he patented a "sanitary" sewer pipe in 1909. It is unknown if profits from his newly designed pipe aided his bank account. By 1926, he worked for the Brooklyn Brick Company. The couple were likely thinking about their future when they built the one-story residence adjacent to the Pennsylvania Railroad. Mr. Zinn was 53 years and she was 48. They managed to weather the Great Depression in the home. The 1930 Federal Census reveals that the house was worth $12,000 at the time and one of the most valuable along the street. The couple had one son, Manvel, although he was an adult and living in New York City by the time they moved into their new house. Sadly, Mr. Zinn passed away in 1936 at the age of 59. Mrs. Zinn moved away from Indianapolis and died in 1944. In 2015, the lovely brick cottage looks much as it did in 1923 when the Zinns took up housekeeping. 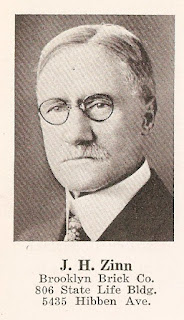 Posted by Bill Gulde at 9:41 AM No comments:

Butler University moved to Irvington in 1875. Thousands of students lived and studied in the neighborhood over the years until the campus finally relocated in 1928. Mary Pavey, from the class of 1912, took several photos of her beloved school sometime during her tenure at the college. Her wonderful photographs documented a campus that was really already too small for the growing student population. Miss Pavey dwelled nearby at 37 South Hawthorne Lane and later at 5338 Julian Avenue. Her photo collection is now housed at the Irvington Historical Society. To learn more about the Society click on the link below.

The photos are courtesy of the Irvington Historical Society. To learn more about how you can join the society in helping to preserve photos like these please click on the link:
http://www.irvingtonhistorical.org/

Posted by Bill Gulde at 8:55 AM No comments:

Mary Pavey, who lived with her family at 37 South Hawthorne Lane, attended Butler University from 1910 until 1912.  After a snowstorm, she grabbed her camera and walked around campus to document the beautiful event. We do not know the exact year of the photo, but it was likely taken around 1912.  The photo along with many others are currently housed at the Irvington Historical Society now located in the Bona Thompson Memorial Library. To learn more about the society click on the link below.

The historic image is courtesy of the Irvington Historical Society.

http://www.irvingtonhistorical.org/
Posted by Bill Gulde at 1:16 PM No comments: