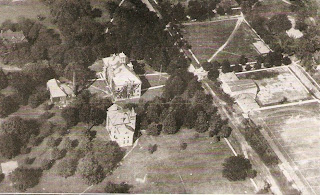 Butler University operated in Irvington from 1875 until 1928. The campus used to stand south of Washington Street and east of Emerson Avenue. Hundreds of people associated with the small college relocated to the neighborhood. Although not as well known today, the names Butler and Irvington were often used interchangeably for decades. The institution moved out of Irvington because it was hemmed in by two major rail lines and there was more room for growth at the Fairview (current) campus. Most of the buildings in Irvington fell into disrepair during the Great Depression and the land was eventually redeveloped for returning veterans and their families after World War II. Only the Bona Thompson Library remains in 2011.

This photo was taken from an airplane during the summer of 1920. You can see the main administration building, the athletic complex, the women's dorm, and the central academic building. None of this remains today. Click on the photo to make it larger.
Posted by Bill Gulde at 2:18 PM 1 comment: 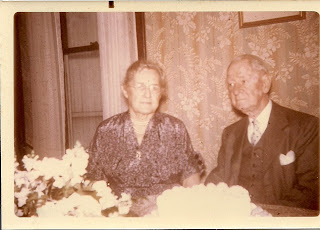 Charles and Hattie Ruhsenberger lived at 5930 East Washington Street for decades. They were married on April 17, 1895, in Clarksville, Indiana. On her wedding day, Hattie carried violets and for the remainder of her time with Charles, he gave her that flower on each anniversary. This is one of the last photos taken of the couple on April 17, 1955, on the day of their sixtieth wedding anniversary.

In this photo, the couple pose in their Irvington dining room. You can see violets on the table and what looks like a cake in front of Charles. This faded color photograph also shows the vibrant blue dress of Hattie and the interesting wallpaper behind the couple. This image and the touching story is courtesy of Ann Stewart.
Posted by Bill Gulde at 4:49 PM No comments: 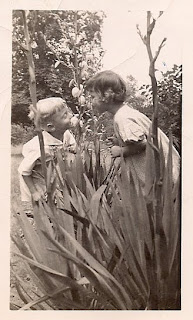 This is a beautiful shot of Roger H. Ruhsenberger (1932-2002) and his cousin Ann Hart (Stewart) sniffing some flowers in the backyard of 5930 East Washington Street. This would make a wonderful painting! You may learn more about the Ruhsenberger family by clicking on the link below. This image is courtesy of Ann Stewart.
Posted by Bill Gulde at 7:16 PM No comments: 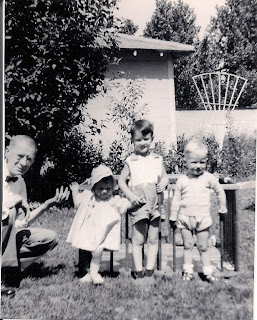 Charles A. Ruhsenberger stands next his three oldest grandchildren in the summer of 1935. The Ruhsenbergers dwelled at 5930 East Washington Street. The children in the photo (left to right) are Ann Hart (Stewart), Larry J. Dillard, and Roger H. Ruhsenberger. It appears that the young boys might be getting ready to play croquet in their grandparent's backyard. Behind the children is a very large playpen used by the Hart family. Mrs. Hart grew very worried about child kidnappings after the infamous Lindberg baby story so she frequently placed her daughter and her playmates in the pen for protection. The garage pictured in the photo belonged to Behrendt family who lived next door. You may read more about the Ruhsenberger family and this Irvington corner in previous posts. This image is courtesy of Ann Stewart.
Posted by Bill Gulde at 5:53 PM No comments: 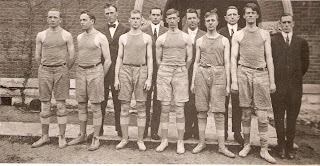 As Butler University attempts to once again break into the finals of the NCAA tournament in 2011, it is worth noting that the 1909 team did quite well. Although many of their best players had to sit out due to injuries, the 1909 squad far surpassed what anyone had expected of them. They began the season by defeating Hanover 37 to 21. In their second game they had a setback against Notre Dame when they only scored eleven points against the 47 buckets by the "Catholics." They went on to rebound and defeat several other schools after their humiliating loss in South Bend. In the final match of the season, the team handily put down Depauw in Greencastle.

In this photo taken in 1909 the following team members are pictured:

Butler's faculty stopped during their busy day in the autumn of 1908 to pose for a photograph. Some of these professors were renown in their respective fields of study. Most of them lived in Irvington. Below is a list of professors with some biographical information and their addresses if known. 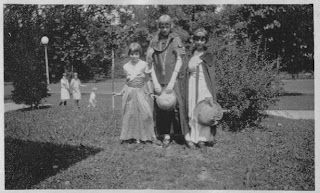 This wonderful shot shows three friends and others in the background enjoying the day. It looks like the girls are enjoying a day of "dress up." The picture was taken in 1922 on the lawn of 5435 Pleasant Run Parkway East Drive. The southern edge of Ellenberger Park can be seen in the distance. Note the wonderful streetlights along the parkway. This photo is courtesy of Martha Scott Baum.
Posted by Bill Gulde at 5:59 PM No comments: 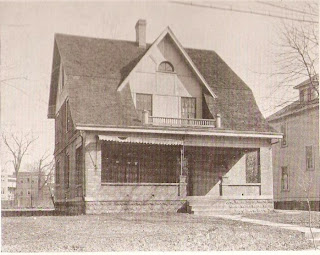 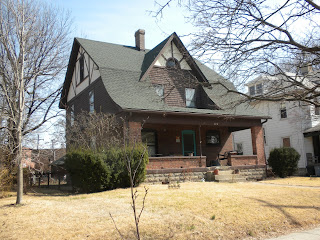 This beautiful home has graced Audubon Road since 1908. William Denvir and his wife Mary were the first to dwell in the house. William served as a manager for the Underwood Typewriter Company. They had at least three children while living in this house including William A., Robert S., and Daisy M. The youngest, who was named for her grandmother, was actually born in the house. Daisy C. Stuyesvant, the widow to Moses, and mother of Mary, also dwelled here.

275 South Audubon Road has had a variety of families living in it including the Stevensons, Wonderlys, Braznells, Burges, Crowells, Guthries, Antles, Andersons, Kings, Sees, Hartmans, Malvases, and the Ecksteins. The house also served as a sorority for Butler University in the mid-1920s.

In the historic photo taken in 1924 you can also see the Children's Guardian Home in the background and part of the double at 301-303 S. Audubon Road. The contemporary photo was taken on March 19, 2011.
Posted by Bill Gulde at 11:56 AM No comments: 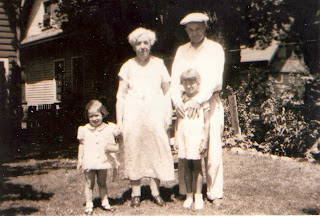 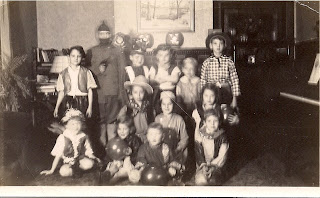 Although we are not close to Halloween, I could not resist posting this fun photograph. Children gathered at the Ruhsenberger home at 5930 East Washington St. in 1938 for a costume party. We may need help identifying some of the kids in the picture. We do know that Ann Hart (Stewart) is pictured second from the left in the front row. Larry Dillard, a cousin to Ann Hart, is the first child on the left in the top row. Larry also dwelled in the house. Their neighbor Bob Vial (20 N. Arlington) is the second child from the left in the top row. He is a wearing a World War One uniform.

Unfortunately, this home is no longer standing, (see previous posts) but we get a great view of the main parlor in the house. Note the beautiful fireplace, the Oriental rug on the floor, and the upright piano. The landscape painting hanging above the fireplace remains in the family. It was painted by Chester L. Stokesberry. Mr. Stokesberry, a cousin (once removed) to Ann Hart, was a watchmaker, jeweler, gunsmith, and an accomplished artist. He and his wife Veta Cannavan Stokesberry and his daughter Mary Ellen lived at 352 Burgess Avenue. The painting won a first prize ribbon at the Indiana State Fair in either 1932 or 1933. Be sure to look for the mantel clock on the fireplace as that piece also remains in the family as of 2011. The photo and the interesting information are courtesy of Ann Stewart.
Posted by Bill Gulde at 3:17 PM No comments: 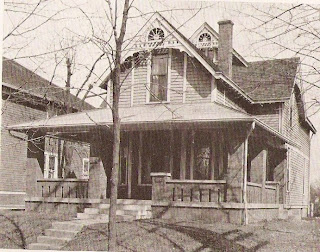 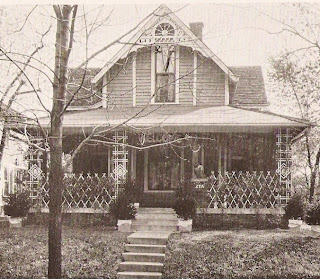 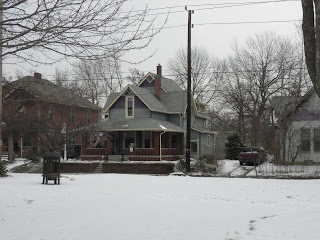 This interesting Queen Anne styled home was likely built in late nineteenth or early twentieth century. In 1910, the widow Lucretia Fellows and her children lived in the house. One son, Clifton D. Fellows served as a custodian. Another son, Fred worked for maintenance at Butler University. She apparently rented out a room in that year to Harry E. Krause, a brakeman for a rail yard. By 1924 the house served as the Zeta Tau Alpha Sorority. 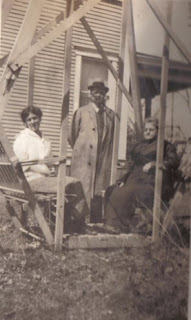 James Thompson Layman, the Vice President of the Layman-Carey Company, poses with his wife and mother in 1910. The Laymans dwelled at 5731 E. Washington Street while the elder Mrs. Layman lived around the corner in the family mansion at 29 South Audubon Road. This image is courtesy of Isabelle Layman Troyer.
Posted by Bill Gulde at 2:55 AM No comments: 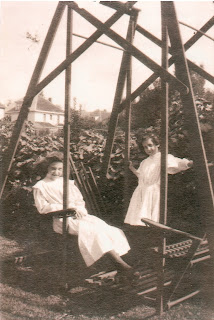 Alice and Isabel Treat of 335 Whittier Place enjoy a leisurely swing in their backyard. The photo was likely taken in 1910. The house in the background is likely 340 N. Ritter Avenue. Additional photos of these girls and of the house may be viewed in a previous post. This image is courtesy of Tawn Spicklemire.
Posted by Bill Gulde at 2:34 PM No comments: 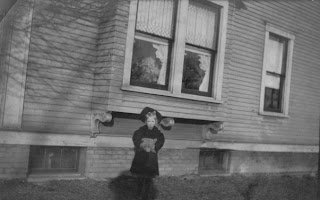 Isabelle Layman poses next to her home at 5731 East Washington Street around 1912. She grew up in this beautiful house (no longer standing). Note the interesting leaded glass windows. To learn more about her family see previous posts. This image is courtesy of Isabelle Layman Troyer.
Posted by Bill Gulde at 10:00 AM No comments: 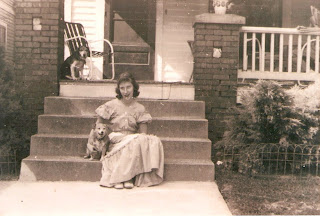 Mary Book (Powell) poses with her beloved dogs on her front porch at 25 South Irvington Avenue in 1950. This image is courtesy of Marty Book Powell.
Posted by Bill Gulde at 3:22 PM No comments: 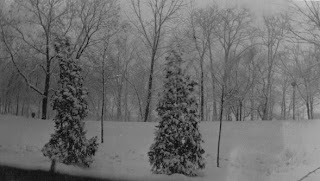 This lovely photo shows Ellenberger Park in the winter of 1922 just after a snowstorm. The view is of the southern edge of the park near Pleasant Run Parkway near Ritter Avenue. This image is courtesy of Martha Scott Baum.
Posted by Bill Gulde at 4:32 PM No comments: 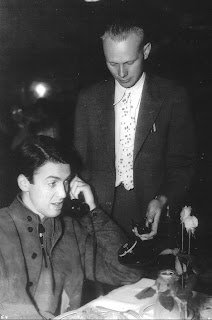 Floyd Whittenburg, the grandson of Jacob and Elizabeth Rubin, (352 Good Avenue) lived in a couple of Irvington homes including 356 Good Avenue. His mother Stella Rubin Whittenburg grew up at 352 Good Avenue. Floyd later moved to Hollywood, California where he worked in the film industry. In this image, he stands next to the actor Jimmy Stewart. Floyd fondly recalled his boyhood days in Irvington in the 1910s and 20s and at age 99 he shared his memories and some photos with Susan Gulde and Chris Capehart. This image is courtesy of Susan and Chris.
Posted by Bill Gulde at 1:12 PM No comments: 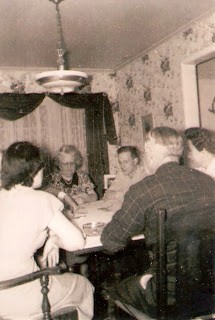 The Book family gather in 1949 in their home at 25 South Irvington Avenue for a card party. There are several things I enjoy about this photo. The Books are in the family dining room. Notice the interesting light fixture and wallpaper. This image is courtesy of Marty Book Powell.
Posted by Bill Gulde at 1:56 PM No comments: