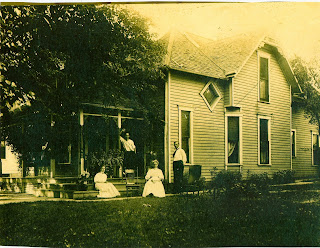 Daniel Pike operated a grocery store along East Washington Street in the early 1900s. He and his family dwelled at 19 North Ritter Avenue. Mr. Pike was also involved in politics. This wonderful photo shows their beautiful home and shady property. The house is still standing although it has been altered. The Victorian porch and pyramidal roofline have been removed. This wonderful image is courtesy of Hazeal Doyle.
Posted by Bill Gulde at 8:48 AM No comments: 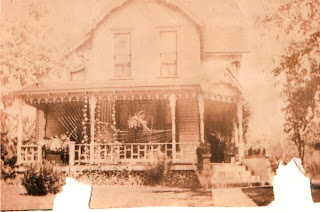 This faded rare photograph depicts 5610 University Avenue in 1910. The house looks largely the same in 2011 although a neo-Classical porch replaced this Victorian one years ago. The home has had much stability with families dwelling in it for decades in some cases. Harlan W. Haworth, a newspaper printer, and his wife Ethel lived in the house from the 1930s through the 1960s. Others to call this home include the Bowsher, Graves, and Thomas family among others. Mrs. Ellen Sommerville lived in the house during most of the Haworth period. This photo is courtesy of Roberta Quandt. It may also be seen in my book Irvington in 1910: A Year in the Life of an Indianapolis Neighborhood. It is available on lulu.com
Posted by Bill Gulde at 5:12 PM No comments:

19-21 South Butler Avenue Then and Now 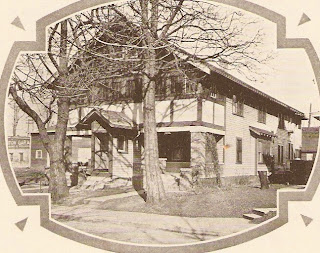 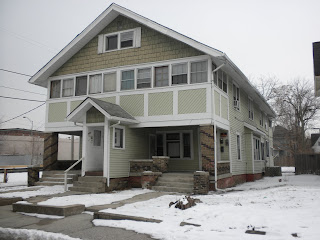 19-21 South Butler Avenue has been carved into apartments since the 1920s. It likely began life as a single family home in the early twentieth century. Elmer Allen, a hardware shop owner, and his family dwelled here in 1910. Other families to live here in the 1910s included the McCormacks and the Klines. The Alpha Rho Delta Fraternity occupied the place in mid-1920s. The young men who lived here could easily walk to the nearby Butler University campus. By 1928 the Reverend Joseph A. Joyce turned the home into the Joyce Apartments. Dozens of tenants have called this apartment home over the decades. Today, the structure appears to be vacant and awaiting a restoration.

The historic image was taken in 1924 while the contemporary image was shot in the early spring of 2011.
Posted by Bill Gulde at 6:13 PM No comments: 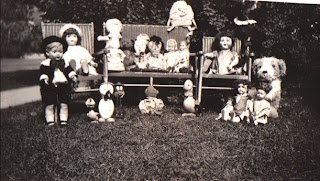 Martha Scott (5435 Pleasant Run Parkway) had quite a collection of dolls as a young girl. An only child, she frequently created an imaginary world in her 1920s era home in Irvington. Many of these dolls or stuffed animals might be worth some money today if they were still around and in mint condition. She posed her favorites in the front yard in the summer of 1922. This image is courtesy of Martha Scott Baum.
Posted by Bill Gulde at 9:48 AM No comments: 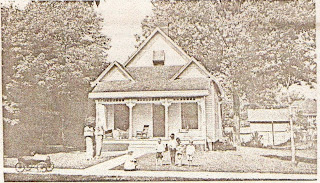 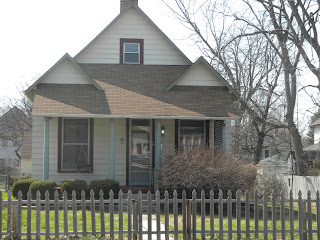 This small carpenter-built Queen Anne cottage has stood at 76 North Ritter since the late nineteenth century. A modest home with six rooms, the structure has served as a dwelling for dozens of Irvington families over the years. In 1910, telephone inspector Alfred S. Barnett and his family lived in the small home. Other families who resided here included the Williams, Schafers, Davenports, Wengers, Cases, Porters, Marquettes, and Rodenbecks. The Howell family, who lived in the cottage throughout the 1960s, 70s, 80s, and 90s stayed the longest.

The older photo is a scanned copy of a letter sent from Peter Wenger to Martha Scott in 1985. In the letter Mr. Wenger, who lived in the house as a boy from 1920 to 1925, jokingly wrote, "And you thought Abe Lincoln came from a humble abode. At least he got a monument, which I am still waiting for." His correspondence is filled with references to his friends along Ritter Avenue including the Campbell (72 North Ritter Avenue) and Elrod children.

The Wengers attended a morning kindergarten located at 18 North Ritter Avenue (demolished) run by Gail Baker. Harry and his best friend "Boy" Campbell used to camp out in the shed in the backyard with the Campbell collie for protection. Harry's mother, in a moment of compassion, occasionally asked her two sons to spend the night across the street as the elderly widow who lived there was afraid at night. He wrote about this years later, "We would get in our PJs and cross the street to go to bed. Neither of us liked doing this." In 1925, the Wengers moved to Oakland, California.

The historic image was taken on July 19, 1920. The children pictured are Genevieve Campbell, Jack Sewatz, Harry Wenger, Jr., Jim Wenger, and Max Taylor. The barn is no longer standing. The Victorian porch has also been removed.

The contemporary photo was taken in the early spring of 2011.
Posted by Bill Gulde at 4:35 PM No comments: 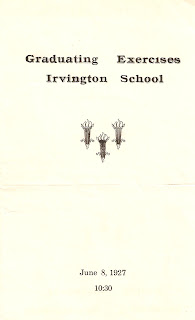 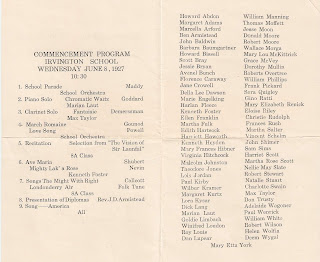 This commencement program from 1927 reveals a formal celebration of the 8th grade class at School #57. Note the musical selections and the number of students who had solos. The list of pupils reads like a whose who of Irvington families.
Posted by Bill Gulde at 8:11 AM No comments: 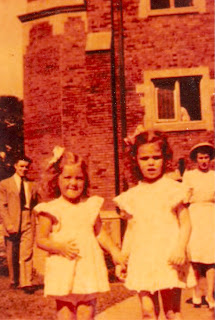 The Bowsher sisters exit the Irvington Methodist Church in 1948. They had just attended a wedding that summer. This color image is courtesy of and in memory of Roberta Bowsher Quandt.
Posted by Bill Gulde at 6:55 PM No comments: 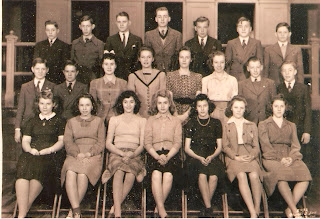 This wonderful school photo needs your attention. We are trying to identify as many people as possible so take a good look and see if you recognize anyone. The photo is an eighth grade graduation picture of the class of 1942 from School #57. John Danner is the only student identified and he is standing at the far left in the middle row. If you know any of the remaining students then drop me an e-mail at sleeth28@rock.com or comment on this page. Enjoy! This image is courtesy of the Danner family.
Posted by Bill Gulde at 6:34 PM No comments:

Christian Women's Board of Missions Building--1926 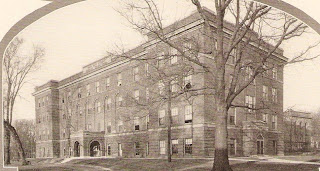 During the winter and spring of 1910, Irvington residents watched as a commanding four-story brick building with a chapel began to arise along University Avenue behind the Bona Thompson Library. Commissioned by the Christian (Disciples of Christ) Women's Board of Missions, the facility would be loosely connected to Butler University. The purpose of the the imposing structure was to prepare missionaries for an overseas assignment. Thousands of people answered the call over the decades and served their posts in places like China, India, and Tibet. Often times, visitors from all over the world came to Irvington to train the missionaries on culture and language. The institution remained in Irvington until the 1990s even when Butler moved in 1928. In the 1990s, the facility was rehabbed and turned into senior housing.

In this photo taken in 1926, you can see the structure from the west. This view is no longer possible as the Disciples added a large addition in the 1940s. In the background you can see the Bona Thompson Library.
Posted by Bill Gulde at 6:57 AM No comments: