Members of the graduating class of 1940 from Our Lady of Lourdes School gathered on the steps of the former church building for this photo taken by Charles J. Bell. Monsignor Michael Lyons sat among the children in the first row. The parish would later name a gymnasium after him.  The only identified student at this time in the photo is Phyllis Rohyans who is the third girl from the right in the third row. If you recognize anyone else in this photo then drop me an e-mail at williamfranklingulde@gmail.com and I will add their name!  The church in the photo was nearing its time on this planet as the last mass held here occurred on June 15, 1941.  The congregation built a newer and larger structure just to the east of this one.


The historic image is courtesy of the Rohyan family via Ancestry.com.
Posted by Bill Gulde at 6:34 PM No comments:

A Buried Path to the Past


Editor's Note:  Guest history sleuth and writer, Paula Schmidt, noticed the start of a sidewalk that seemed to go nowhere along South Butler Avenue.  Or did the path at one time go to a building long gone? Her investigations led to the unraveling of an interesting tale!
A Buried Path to the Past
By Paula Schmidt

Do you remember reading the Shel Silverstein book, Where the Sidewalk Ends?  I know where it ends. It ends at my neighbor's house near a lovely four square double on the corner of South Butler and Julian Avenues.  Along Butler Avenue, my neighbor’s sidewalk used to be edged with tilted bricks similar to how my grandmother used to line her flowerbeds.  The mysterious walkway followed the sidewalk and then gracefully curved into what should be steps leading up to a house, but there are no steps!  What's the deal?
It appears that an earlier home was here.  At the moment, I cannot locate a picture, but I do know the shape of this early structure thanks to the Sanborn Fire Insurance Maps.  In the 1898 map, the house is shown as a smaller single family dwelling on Lot # 58 with Lot# 57 vacant. By 1915, the map indicates that there is a larger multi-family dwelling that straddles both lots. Another mystery is that the records at the Assessor's Office indicate that the brick four square was erected in 1919.  Even without a picture of the original house, I hope you enjoy this tale.  It is full of irony, drama, love and tragedy.
In 1910, a single home sat on these two lots and faced Butler Avenue.  The address was either 107 or 105 South Butler Avenue.  Based on the book Irvington in 1910, a family by the name of Newby lived there: James M., his wife Elizabeth, and their child.  It appears that they lived at this residence for two years.
Mr. Newby was in real estate. The 1907 city directory shows he was in business with George E. Wallace (Wallace & Newby).  In 1908, he partnered with Perry F. Carr  (Newby & Carr).  Both businesses had offices at the Baldwin Building in downtown Indianapolis.  In 1910, it appears that the bottom dropped out for the Newbys.  Mr. Newby purchased a piano in 1907 from a dealer by the name of Currens as a Christmas present for his child and he provided a deed as collateral.  The owner of the piano shop discovered that the deed was bogus and sued.  There was a jury trial and James M. Newby was convicted of theft on April 27, 1910.  His wife was frantic and actively sought the release of her husband…even after the judgment was affirmed (175 Ind. 515).  By 1913, James M. Newby was out of the Michigan City Prison and back in Indianapolis working in real estate.  Again he was involved in, or at least accused of, a shady real estate deal ("Men Accused of Real Estate Swindle", Indianapolis Star, March 4, 1913, 7).  His trial was delayed because his child was ill (March 13, 1913).  By September 9, 1913, the Indianapolis Star stated that the victims admitted that there was no swindle. ("Land Fraud Cases Dropped by State," Indianapolis Star, September 9, 1913,18)  I know you are getting weary of all this drama, but alas, there is more.  On August 1, 1914, a train struck a car carrying Mr. Newby at a railroad crossing on East Market Street killing him. ("Coroner Will Fix Blame for Fatal Crossing Crash," Indianapolis Star, August 1, 1913, pg 16).   A lawsuit in 1915 filed by his widow, Elizabeth resulted in a verdict against Lake Erie & Western RR and the flagman.  Elizabeth was awarded $5,000 ("City News," Indianapolis Star, January 29, 1915, 9). Elizabeth died in 1939. 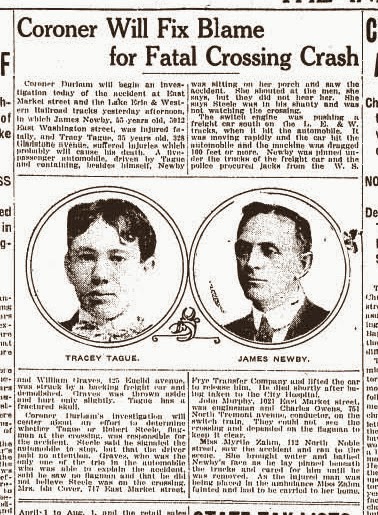 The Newby family is long gone from the neighborhood as is their home, but if you look closely as you walk along South Butler Avenue you might imagine the start of a sidewalk that used to lead somewhere.  I wonder how many more interesting tales of Irvington are yet to be uncovered and how many have disappeared?
Posted by Bill Gulde at 6:10 PM No comments:

The Wren family moved into this lovely new home at 132 South Arlington Avenue in 1908. Sadly, Dennis Wren died just as the family set up housekeeping leaving forty-year old Mary Wren in charge of their five children. Mrs. Wren, whose parents had come from Ireland, used all of her resources to keep the house including inviting her own widowed brother, Bartholomew Griffin and his two children, to move into the house in 1909.  Nine people now crowded into the modestly-sized home.  While living here, the Wren family said goodbye to fifteen-year-old Cecelia Wren who passed away in 1909.  The Wrens and Griffins moved from the house in 1912 for another home nearby on Catherwood Avenue. More tragedy awaited Mrs. Wren at the new house with the death of her brother leaving her in charge of her nephew and niece.  Perhaps even more difficult to bare would be death of her eighteen-year-old son Thomas in 1917.  Thankfully, her other children would live well into their elder years as would she passing away at the age of 71 in 1939.

The historic images below were taken sometime between 1908 and 1910.  The home at 132 South Arlington had just been built and was owned by the Wren family.  The dwelling has just one dormer and it faces south similar to a home at 136 South Arlington so perhaps they were erected by the same builder.  In the top photo, four-year-old Bernice Wren (1904-1980) posed on the front porch of the newly-constructed home at 132 South Arlington Avenue.  Notice the wide open spaces and the dirt still around the house from the construction.  Someone has opened an upstairs window so it must have been a warm day.  In the second photo, taken c1910, Bernice and Thomas Wren posed on the front steps at 132 South Arlington Avenue.  They were clearly siblings! Just look at their faces. Mrs. Wren had put out a potted plant above them.  Sadly, Thomas only lived to be eighteen years old.  The final photo shows the home after a snowfall on February 15, 2014.  You will note that the house has been clad in vinyl siding and the historic front porch was removed at some point in time.


The historic images are courtesy of the Wren-Griffin family via Ancestry.com
Posted by Bill Gulde at 10:55 AM 2 comments:

Fifty-one years ago in the early spring of 1963, a photographer took this wonderful shot of the Irvington Presbyterian Church.  The grass had just started to turn green and buds can be seen on the trees along Johnson Avenue. You can also get a look at part of the Arts and Crafts double that used to sit just east of the church along Julian Avenue.  The corner formerly hosted a U.S. postbox.  I wonder who owned those giant cars parked along Johnson Avenue?

The historic image is courtesy of Bill Ferling and the Irvington Presbyterian Church. The color was restored by Larry Muncie.
Posted by Bill Gulde at 5:07 PM 2 comments:

Driving down the 900 block of Graham Avenue from East 10th Street, it becomes apparent that the homes on the east side of the street north of St. Joseph Street are at least thirty years newer than those on the west side of the street.  There is a simple explanation for this fact.  For years, the Indianapolis Public Schools held on to the thought that one day a school would be needed in the Irvington Gardens section of the neighborhood so they purchased six lots along Graham Avenue north of St. Joseph Street.  By the 1950s, it was clear that the district did not need a school in that area so they sold off the lots to a developer who actually turned six small lots into four.  Ranch and neo-colonial styles sprung up across from bungalows and Tudor-Revivial houses.

In 1958, Leland Dickerson (322 North Rigeview Drive) happened to be dropping off a daughter's friend along the street when he saw a man pounding a for sale sign into the yard of 951 North Graham Avenue.  The house was only four years old and was being sold by homeowner Robert O. Whitesell.  Mr. Dickerson quickly carved together enough cash to make a down payment and moved his wife and three kids into the beautiful new home.  Mr. Dickerson particularly enjoyed the private driveway and large garage. He and his wife Anna Belle also liked the pretty landscaping.

The tree-lined avenue still retains the beauty that first attracted the Dickerson family to this part of Irvington just as it might have fifty-six years ago.


The historic photos are courtesy of Leland Dickerson.
Posted by Bill Gulde at 4:53 PM No comments:

Raising a Family on Ridgeview Drive--1950s

Leland and Anna Belle Dickerson moved into 322 North Ridgeview Drive in the early 1950s along with their two children, Linda and Robert. Another son would soon be on the way, so the couple needed a larger home and the brick bungalow would suit them perfectly. The Dickersons enjoyed the beauty of the house including the screened and glassed-in front porch. Mr. Dickerson reported that although it was over thirty years old by the time they moved in, the bungalow was solidly built.  The house had two bed bedrooms downstairs and one large room upstairs that Mr. Dickerson converted into two bedrooms. The kids walked to School #77 on Arlington Avenue and had fun playing with their friends along the quiet street.

The couple had nice neighbors although Mr. Dickerson recalled one resident behind them who frequently blocked the alley with his car.  This prompted Mr. Dickerson to storm over there and ask the wayward citizen to move his auto.  He also chuckled about the fact that his large 1950s-era car frequently had trouble navigating the slight incline into the garage on snowy or slick days.  Despite those issues, the Ridgeview Drive years were very happy for the family.  Mr. Dickerson noted that had the backyard been larger, they might have stayed there longer, but in 1958 everything changed when Mr. Dickerson happened to be passing by 951 North Graham Avenue.  (More on that story in my  next post.)  You may see more images of Ridgeview Drive from an earlier era by clicking on the link below.

The historic images and stories are courtesy of Leland Dickerson.
Posted by Bill Gulde at 8:28 AM No comments: