Lawrence and Nell Dufour dwelled in three houses in the Irvington area. They would in total have ten children:  Lenore, Daniel, Sussanne, Richard, Donna, Bernadette, Christopher, Victoria, Maria, and Dianne.  While Mr. Dufour worked as a salesman and traveled all over the state of Indiana, Mrs. Dufour stayed home with the children. She washed clothes every single day and diapers for at least fourteen years.  She prepared meals daily and made sure the children got off to school. Somehow she also found time be an active part of the community. In 1948, her husband gave her a journal to record and document their lives which she did faithfully for two years.  Her daily snippets reveal so much detail about their lives at their Michigan Street and Audubon Road addresses. She stopped recording events throughout the 1950s due to her busy life, but she resumed again in the 1960s.

All of the following journal entries were written while the Dufours dwelled at 5125 East Michigan Street in 1948.

January 18, 1948:  Larry and I went to the Emerson this evening to see Rex Harrison and Maureen O'Hara in "The Foxes of Harrow." She is beautiful and a wonderful actress, but the picture was definitely in the "B" category. 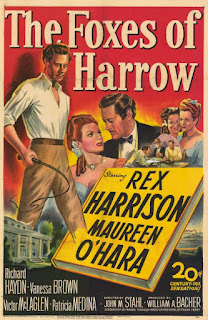 February 14, 1948:  Daddy brought the children a large box of Fannie May Candy as a Valentine to them! To me, he sent a dozen of lovely long-stemmed roses. He is still sweet and considerate. My Valentine to my family were individual cakes which went over big.

May 30, 1948:  The whole family got together and cleaned up the yard. It is quite a job and will have to finish tomorrow. After our hard work, we had a lovely picnic in the backyard--our first this year.

June 2, 1948:  Men putting shingles on house had to stop on account of shortage of materials...

November 14, 1948:  Christopher was baptized! Julie and Bryan Grotegut (5135 Ohmer Avenue) are his godparents. Father Beechum (Joseph Beechum) baptized him at 2:30 at Our Lady of Lourdes Church in Indianapolis, Indiana. Father Beechum was our guest at dinner which everyone seemed to enjoy. The menu was:

December 18, 1948:  Came home through several inches of snow. It came down suddenly and furiously. Everything looks just beautiful in this typical winter wonderland. It is our first real snowstorm this year. Daddy had the tree up when we got home.

Posted by Bill Gulde at 1:09 PM No comments:

The Dufour Family Moves to Indianapolis

The Dufour family name is well-known on the east side of Indianapolis because of a lovely cafe that sits on the northwest corner of East Washington Street and Audubon Road.  The family has been an important part of the Irvington community since 1940. Lawrence  and Carmella (Nell) Dufour met in Chicago and married there in 1935.  In 1939, the couple moved to Indianapolis on Guilford Avenue in Broad Ripple. Mr. Dufour was employed as a salesman.  By 1940, the couple had two small children so they rented a bungalow at 4003 Brookville Road. Soon that house had become too small so the Dufours, who now had four children, moved to 738 North Dequincy Street in Emerson Heights in 1942.

By the early 1940s, Mr. Dufour was established as a salesman of kitchen supplies for the Albert Pick Company. He helped firms, schools, hospitals, and non-profits with the designs of their kitchens. He spent much of his week traveling down the highways of Indiana from one city to the next selling stainless steel tables, cabinets, and industrial appliances. When he was home, he often worked at the dining room table creating blueprints, drawings, or plans.  His wife, Nell, would not only keep their growing family out of the dining room while Mr. Dufour worked, but she also typed up the quotes.

The Dequincy Street home would be the first of three houses that the Dufours owned. They paid $30 a month for their mortgage. While living in the house, the family attended Little Flower Catholic Church, but by the mid-1940s they would find their forever church with Our Lady of Lourdes on East Washington Street.  The Dufours would in total have ten children so there was always a great necessity of finding a larger house. Furthermore, Mr. and Mrs. Dufour occasionally took in families or people who needed a home.

With the start of World War II, Mr. Dufour attempted to enlist in the U.S. Army, but officials turned him down due to his blood pressure issues and the number of children he had. Instead, he became a local air raid warden for the Emerson Heights area. His job was to make sure that local neighbors turned off lights or at least shut their curtains so that would-be bombers wouldn't see the city during drills. In 1945, the growing Dufour family moved to 5125 East Michigan Street in the Pleasanton section of Irvington.

Stay tuned as more posts will be coming on this interesting Irvington family.


The historic photos and stories are courtesy of the Dufour family.
Posted by Bill Gulde at 1:56 PM No comments:

Saying Goodbye to Their First Home--1941

Edward and Georgia May Lollis first moved into 5919 Julian Avenue in 1937. They brought their newborn child, Ted, into the home in the same year.  Ever the shrewd investor, Edward Lollis had already purchased two doubles at 5866-68 and 5872-74 Julian Avenue in 1936.  Mr. Lollis convinced his wife to move into one side of one of the doubles. Leaving the house might have been bittersweet for Mrs. Lollis as her large furniture would now have sit in a much smaller space. Not many people were buying and selling property during the Great Depression, but Mr. Lollis managed to make everything come to fruition.  He taught his son that once you get a good job you do everything you can to keep it.  With the steady income from his insurance job and from his renters, Mr. Lollis was able to make other key investments.  On May 11, 1941, the family left the large American Four Square at 5919 Julian Avenue for good.  Mrs. Lollis insisted on documenting the day so that her son would know about his first childhood home.  She started with photos of the interior of the house and then of each family member standing in front of the house.


The historic images are courtesy of Ted Lollis.
Posted by Bill Gulde at 1:54 PM No comments:

A Pair of Doubles Along Julian Avenue

In August of 1936, Edward and Georgia May Lollis purchased two doubles at 5866-68 and 5872-74 Julian Avenue. The couple had moved down the block into 5919 Julian Avenue, but by 1941 they decided to settle into 5866 Julian Avenue to free up money for future investments.  Mr. Lollis was particularly interested in purchasing farmland in a nearby county.  The backyards of the two doubles were quite deep so young Ted, the son of Edward and Georgia May, and his playmates had plenty of room for adventures. The backyards of the doubles abutted an empty lot with a small pond along East Washington Street in what would later be the site of the Mohawk Manor and now the Irvington Lofts. Eventually, Mr. and Mrs. Lollis sold 5866-68 to Otis Becker and moved into 5872 Julian Avenue.

The historic photographs are courtesy of Ted Lollis.
Posted by Bill Gulde at 12:59 PM No comments:

Temperatures began to drop in Indiana on Tuesday, November 22, 1938. By nightfall the wind picked up and the snow arrived in Indianapolis.  By the morning of November 23, city residents awoke to four inches of snow. The Indianapolis Star reported that the snow had caught the state off guard. Dozens of residents flocked to service stations to place anti-freeze in their vehicles.  Slick roads made last minute preparations for Thanksgiving that week very difficult.  A giant car show at the Fair Grounds still went on and plenty of folks attended the event. Most travelers still made it to their Thanksgiving destinations. One Irvington family did suffer a tragedy that week. Vigil McDermid of 5376 Burgess Avenue died after sliding off a road in northern Marion County. The fifty-four-year-old man, was a father of three and worked as a salesman for the Pearson Piano Company.

On Julian Avenue, Edward and Georgia May Lollis welcomed Malcolm Benjamin Campbell and his wife Bessie Fields Campbell from Yakima, Washington. Georgia May Lollis was the niece to the elderly couple who were in town to celebrate Thanksgiving with the Lollises'. Mr. Campbell was 81 and Mrs. Campbell was 69. Excited by the new morning snowfall, the families left the warmth of 5919 Julian Avenue to document the early snow.

Photos from the snowy day, show not only the Lollis and Campbell families, but also some of the nearby properties.

The historic images are courtesy of Ted Lollis.  To see more images from this block click on the Lawton or Readle family links below.

Posted by Bill Gulde at 7:31 AM No comments: