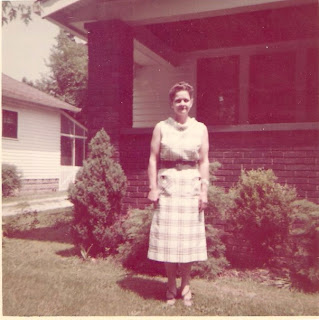 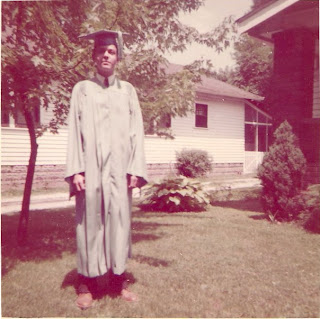 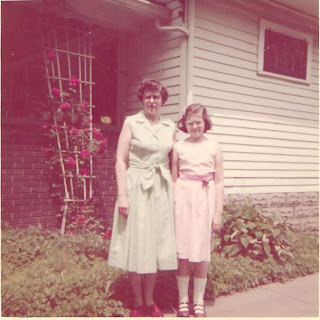 Mrs. Murray N. Marx invited her neighbors over to her home on the occasion of Michael Hunt's graduation from Howe High School in 1958. The Hunts lived at 341 South Audubon Road while Mrs. Marx lived at 345 South Audubon Road. These wonderful color photos show both homes. 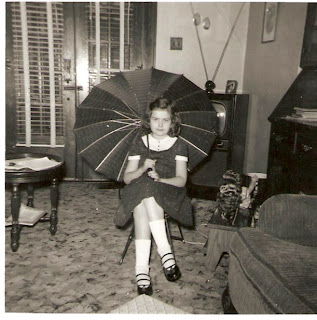 Janet Hunt sits in her childhood home at 341 South Audubon Road after having just opened her birthday presents. There are so many things I love about this photo. She is all dressed up as she is about to have a birthday party. Behind her you can see the giant television-console set with rabbit ears. Below her is a wonderful 1940s-era rug covering the hardwood floors. The picture also reveals several wonderful features about this historic bungalow including the double door entryway, beautiful woodwork, and a built in cabinet in the living room. The couch in the foreground also looks very comfortable. This image, taken in 1956, is courtesy of Janet Hunt Wilzbacher.
Posted by Bill Gulde at 12:14 PM No comments: 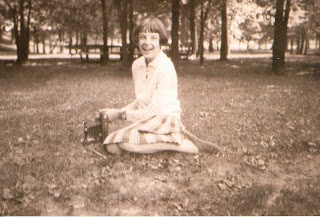 Martha Scott laughs as a family member takes a photo of her in Ellenberger Park. Perhaps she is smiling because she is also about to take a picture. The Scotts resided nearby on Pleasant Run Parkway. You may learn more about the Scott family by clicking on the link below. This image is courtesy of Martha Scott Baum.
Posted by Bill Gulde at 2:38 PM No comments: 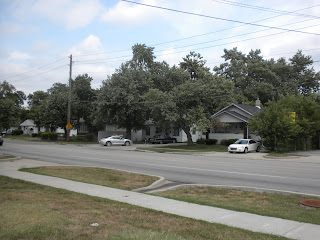 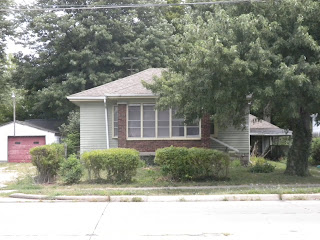 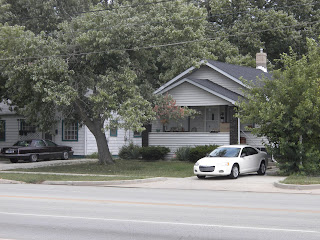 These two small bungalows, likely built in the 1920s, stand at 561 and 569 South Arlington Avenue near Brookville Road. The historic image, taken in 1941, shows that the street was a quiet narrow path and the area around the homes was largely pasture and meadow. It was a nice country setting.

In 2011, the street is busy and has been widened as it is a major thoroughfare that stretches from southern Marion County to East 56th Street. The lots, which were largely undeveloped in 1941, were bought up in the 1950s and 60s. Developers built modest homes on the empty lots and a factory and several commercial businesses sprang up along Brookville Road.

The photographer of the historic 1941 picture clearly aimed for the cute dog running towards the camera, but in the background you can see 561 and 569 South Arlington Avenue.

The contemporary photos taken in 2011 show the area today. 561 South Arlington is still largely intact and relatively unaltered. Only the front porch has been enclosed. 569 South Arlington has been encased in vinyl siding and many of the windows have been changed out.

The historic image is courtesy of Helen Hunt.
Posted by Bill Gulde at 1:49 PM No comments: 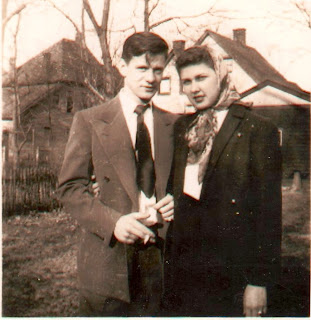 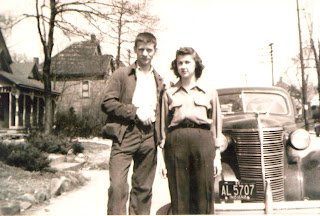 These photos capture the early courtship of John and Doris Danner. John grew up at 72 North Ritter Avenue while Doris grew up south of Irvington. After their marriage, they decided to stay in the neighborhood and lived for many years in the Danner Home before moving to University Avenue.

In the bottom photo, the Danners stand along the street in front of 72 North Ritter and next to a hulk of a car. The wonderful Victorian/Queen Anne porch still remained at 76 North Ritter and it looks like Elizabeth M. Marquette, a widow and resident of 76, has placed stones around her property. The double beyond 76 North Ritter at 80-82 N. Ritter was occupied by Charles E. and Cleo K. Hunter on one side and Vernon and Leta H. Nagle on the other side in 1949. These images are courtesy of the Danner Family.
Posted by Bill Gulde at 10:46 AM No comments: 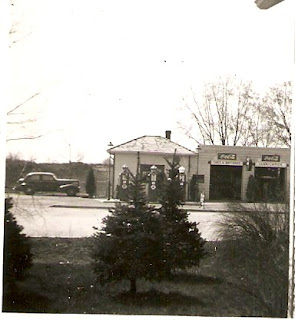 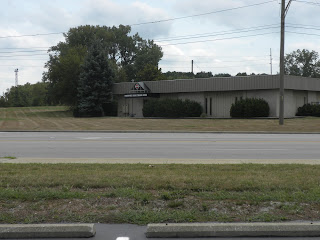 Irvington is filled with beautiful Victorian and Arts and Crafts-era homes, but what of the other structures? Clearly by the 1910s, as residents began to buy automobiles, they needed filling stations. Very few of the first generation gas stations remain in Indianapolis. Because Brookville Road used to be the main route for travel between Indianapolis and Cincinnati, several entrepreneurs constructed petrol stops at various crossroads and in small towns all along the highway. Brookville Road and Arlington Avenue served as a gateway intersection for entering southeastern Indianapolis so it became a likely candidate for just such a business.

This rare image shows the McKissick & Williams Filling Station in 1939. City directories reveal that it had been located at 5989 Brookville Road (southwest corner of Brookville Road and South Arlington Avenue) since at least the 1930s and possibly earlier. Other filling stations would eventually arrive at all four corners of the intersection. As the factory to the west of the station expanded, the structure was torn down. Most of the first and second generation gas stations in Irvington have closed or are being used in another capacity.

The historic image is courtesy of Helen Hunt. The contemporary image showing the site today was taken on August 4, 2011.
Posted by Bill Gulde at 12:12 PM No comments: 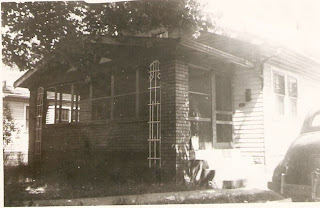 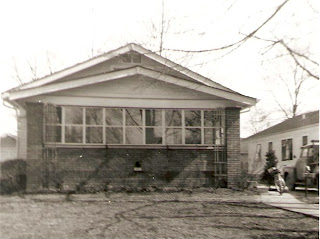 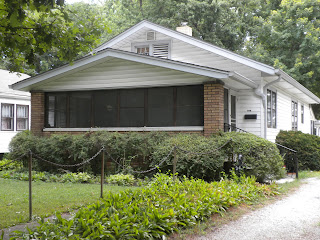 Seven different families called 341 South Audubon Road home before 1942 including the Holtzenhausens, Smiths, McMartins, Landers', Walkers, Cordhills, and Quaites. The home was completed by 1927 and Otto F. Holtzhausen, a printer, and his family, were the first to call the two-bedroom bungalow home. Situated among three other bungalows, the home was part of a mini-building boom in Irvington that lasted until the Stock Market Crash of 1929. Contractors built several other bungalows nearby on Beechwood, Rawles, Burgess, and Ritter Avenues. North of the home at the corner of Oak Avenue and Audubon Road stood the majestic Carr Home, an original Italianate, from the first building boom of the 1870s and 1880s. It still stands today and will be featured in future posts.

Stability arrived to the house when Leroy and Helen Hunt moved in with their son Michael in 1942. They would later add Janet into the mix and remain in the home for decades. Mr. Hunt worked as a pharmacist while Mrs. Hunt raised the children and volunteered with the Irvington Presbyterian Church.

These mid-century photos, likely taken around 1956, show that Mr. Hunt had already enclosed the porch. Later the Hunts would also add aluminum siding. The original 1920s era detached garage remains as do many lovely interior features such as built in cupboards, and several 1920s era light fixtures. In one of the photos you can also get a glimpse of 345 South Audubon Road, another bungalow. The contemporary image was taken on July 28, 2011. The historic images are courtesy of Helen Hunt.
Posted by Bill Gulde at 1:22 PM No comments: