The Bruckman Sisters Go For A Drive--1942 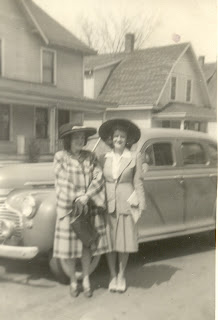 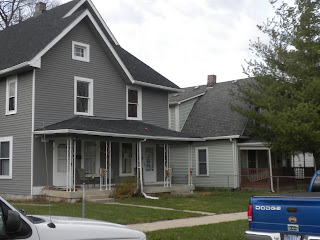 In this wonderful photo, Christine and Joan Bruckman pose next to their brother's car. George Bruckman was serving in the navy at the time as World War II had begun. The sisters are decked out in their traveling coats and hats and are deliberately standing in front of the fender of the car. Apparently, they had a slight mishap and scratched George's beautiful automobile. They confessed to this minor accident to their brother nearly sixty years later!

Behind the young ladies you will note 136-138 (a double) and 132 South Hawthorne Lane. Russell Whiteman, an engineer, and his wife Beatrice lived on one side of the duplex in 1942 while Carl Fenley, a machine operator, and his wife Esther lived on the other side. John and Beatrice Risch lived in the Dutch Colonial Revival home at 132 South Hawthorne. He was a florist.

The contemporary photo, taken in 2011, reveals that the homes have been slightly altered since 1942, but retain many of the features known to the Bruckmans, who lived across the street. You may read more about the Bruckmans by clicking on the link below. The historic image and Bruckman Family lore are courtesy of Don Rouse.
Posted by Bill Gulde at 3:41 PM No comments:

The Big House and the Little House: A Tale of Two Families 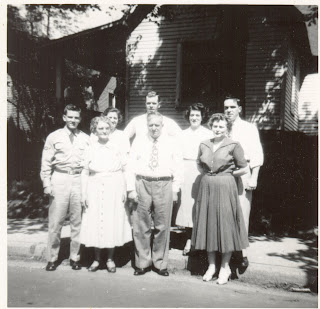 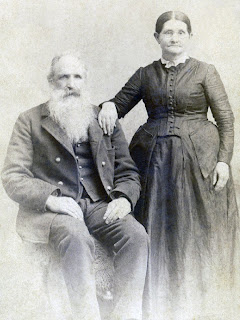 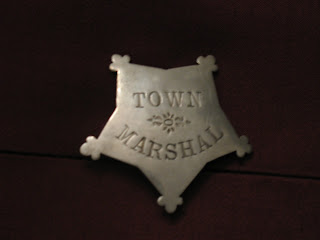 Hawthorne Lane used to be called Dillon Avenue. In 1892, Cora Huber purchased a lot from Harry Milligan along the Pennsylvania Railroad on Dillon. The home was likely completed in December of that year. Cora worked as a seamstress at the Indianapolis Shirt Factory and invited her parents to go in on the nine room home with her. Within two years, John Huber passed away in the new home leaving his wife, Mary and daughter, Cora as the primary bread winners for the family. Mr. Huber had been well known in Irvington as he served as the town marshall for several terms. After his death, the women pulled themselves together and set up housekeeping of what would become 145 South Hawthorne Lane. By 1899, all of the Huber children had grown up and moved away.

Around 1899, it was decided that Mary needed a smaller dwelling so the family purchased the lot to the north of the home and built the "small" house at 141 South Hawthorne Lane. The Hubers rented the "large" house for years to Butler students. Mary also kept boarders in her own small cottage as well. Eventually, each room in the house had a door leading outside so that Butler students could come and go without disturbing anyone. One resident of the home, Julia Florence Huber Van Cleave, the granddaughter of John and Mary Huber, remembered that as a child they waited for the lamplighter to come around each night to light the street lights. She and other children would gather the discarded wicks and use them to draw hopscotch squares on the sidewalk.

The Bruckmans, who were related to the Hubers, acquired 141 South Hawthorne Lane in 1926. Surprisingly, the house had no indoor plumbing and only a Franklin Stove for central heating. Needless to say, the Bruckmans had their work cut out for them as they also dug out a basement. The home used to have a large barn in the rear of the yard but it burned in 1927.

The Bruckmans became a fixture in the neighborhood and dwelled in the home for decades. 145 passed to other families including the Twymans, who the Indianapolis Star featured because of their lush Victory Garden planted during World War II.

Two houses side by side with a story that could have been forgotten or lost to the ages, but thankfully has been brought to our attention by Don Rouse. His great aunt, Charlotte Huber Timmerman, compiled much of this information for a family history project she completed in 1979.

The third photo shows John and Mary Huber. Mr. Huber passed away in 1894 leaving Mary a widow and fending for herself. She moved into 145 South Hawthorne Lane first and then into 141.

The bottom photo is a photograph of John Huber's town marshall badge.

These historic images are courtesy of Don Rouse. More on the Bruckmans will be forthcoming.
Posted by Bill Gulde at 1:57 PM No comments: 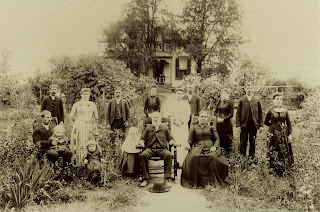 The Bruckmanns traveled from Darmstadt, Germany and lived in both Ohio and Illinois before moving to the 10th and Arlington area in the mid-1860s. They lived in a log cabin and eventually built this fine home for their twelve children. (nine lived to adulthood) The dwelling remained in the family until the 1950s when they sold it to Mr Guidone. The house was demolished and developers put in a commercial area. Some of the farm remains undeveloped in 2011.

This remarkable photo shows the Bruckmann Family in 1893. The younger generation dropped the second "n" from the name. Only three married and had children. Some of those descendants lived in and operated businesses in the Irvington area. Notice the lushness of the front yard. The matriarch of the family, Elizabeth Rush Bruckmann, a Virginian, whose parents immigrated from Prussia, maintained a beautiful garden.

Today, it is difficult to imagine this beautiful Eden as this area along East 10th Street is now filled with concrete block commercial buildings and asphalt, but at one time it must have been one of the loveliest places to ride by on a leisurely outing either in a carriage or Model T. I am indebted to Don Rouse for the stories and this amazing photo.
Posted by Bill Gulde at 10:37 AM No comments: 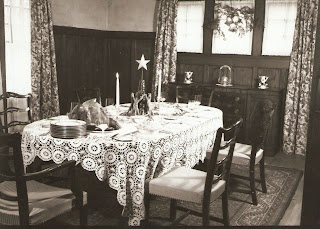 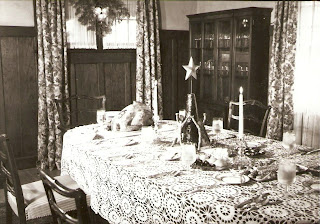 Happy Thanksgiving to all of the readers of Vintage Irvington. For today's post, you shall sit down to dinner with the Hartsock Family of 59 North Hawthorne Lane in 1941. The Hartsocks dwelled in a house designed by Gustav Stickley. One of these photos appeared in Paul Diebold's Greater Irvington. (1997). Notice the beautiful wood that surrounds the room. The table was more likely set for a Christmas meal, but who wants to wait until then? Enjoy! These historic images are courtesy of Brian and Emily Mack. You may learn more about this home by clicking on the Gustav Stickley link below.
Posted by Bill Gulde at 8:44 AM No comments: 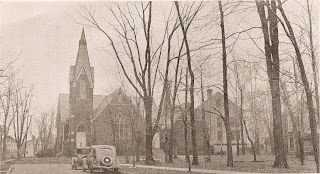 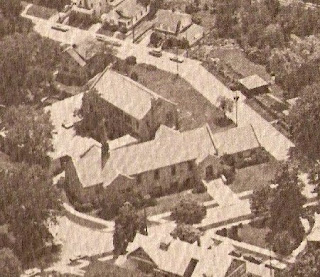 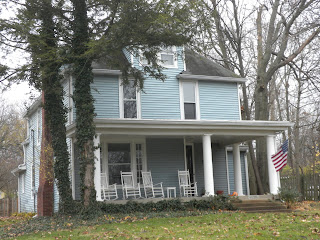 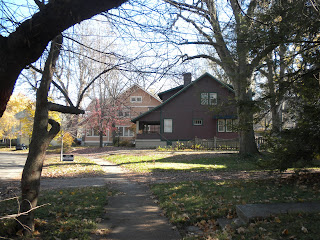 Several churches formed early in Irvington. The Downey Avenue Christian Church was associated with Butler University as both institutions were of the Disciples of Christ denomination. Numerous prominent members of the neighborhood belonged to this church including newspaper publisher Hilton U. Brown.

The 1936 photo (top) shows the 1893 structure. It was torn down in 1952 to make way for the current building. Next to the church you will see the educational facility (1914) which you will note was still standing in the 1970 aerial photo, although it has since been demolished.

The house to the south of the of the school at 129 Downey Avenue belonged to Walter H. and Marjorie Montgomery in 1936. Mr. Montgomery was president of Crown Laundry and Dry Cleaning. The house has been changed since 1936 including the roofline and porch. (third photo)

One Year and Still Going Strong! Aerial Photo of Irvington in 1970 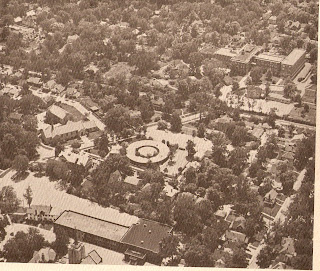 Vintage Irvington reached a milestone this week. One year ago I jumped into the idea of creating a blog dedicated to documenting Irvington's historic and near recent past. I was not sure if I would have enough material, but thanks to all of you the photos, letters, journals, and pieces of ephemeral keep coming. Send me scanned photos of your family's home! I would love to profile and celebrate your Irvington heritage. You may reach me at sleeth28@rock.com.

In honor of the one year anniversary, I hope you enjoy this aerial photo taken of Irvington in 1970. The pilot hovered just above the tower of Our Lady of Lourdes Church so that the photographer could take a south and slightly southeastern shot of the neighborhood. Some of the structures seen in the photo are no longer standing and folks in that part of Irvington will also notice trees that have come and gone since 1970. This photo first appeared in Gertrude Hecker Winder's book, A Glimpse of Irvington Then and Now, 1870-1970.
Posted by Bill Gulde at 5:19 PM No comments: 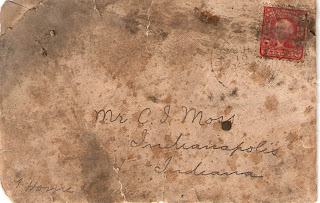 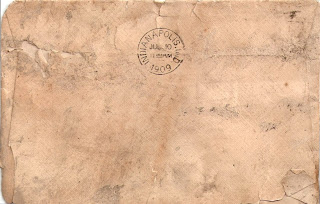 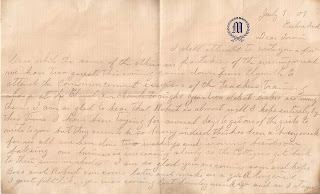 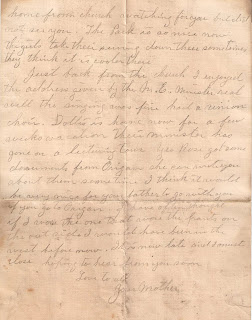 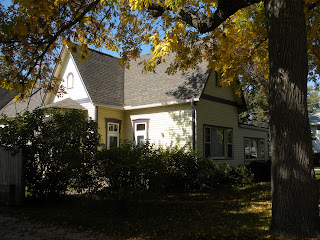 Did he forget the letter or did it fall out of a box? Why did he place it in the attic? Over one hundred years ago, Charles Irvin Moss, age 31, received a note from his mother on July 10, 1909. It was a sweet letter and one that he obviously chose to keep, but somehow the note, still in its envelope, fell below some floorboards in an unfinished attic in a small cottage at 108 South Audubon Road. There it remained for decades until some recent electrical work revealed the post once again.

Charles Irvin Moss, affectionally called "Irvin" by his mother, boarded along with his wife Bess, 28, and their newborn son Robert with the Anderson family. He worked as a bookkeeper for the Home Brewing Company. The tiny cottage where his new family dwelled must have been very crowded because not only were Dr. John Anderson, 49, and his wife Anna H., 49, living there, but Mrs. Anderson's sister, Sarah McElwain, 60, a servant for an Irvington family, also called the Audubon Road cottage home. Across the street dwelled Grace Julian Clarke and her husband Charles in a large Italianate villa.

The letter, mailed from Culver, Indiana, is a newsy update on life in the Moss Family. The mother is quite playful at times and reproachful in a few lines. I just felt like you was coming last Sunday a week ago and so I stayed home from church watching for you but did not see you. In another part of the letter she encouraged her son to think about moving to Oregon. She is clearly frustrated with her husband for not taking a similar action. If I was the one that wore the pants on the outside I would have been in the West by now.

Clearly, more research is needed on this interesting family. Did they move to Oregon? What became of the infant Robert? Were they happy? We only have one small artifact found under some floorboards of their existence in Irvington, but with some detective work, more information could be forthcoming.

It is now late and I must close hoping to hear from you soon. Love to all, Your Mother

This wonderful artifact is courtesy of Suzanne E. Katt.
Posted by Bill Gulde at 2:57 PM No comments: 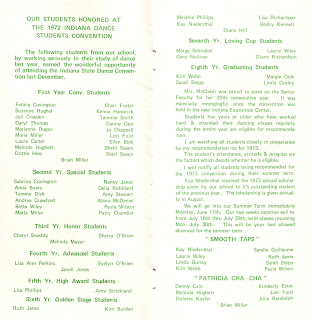 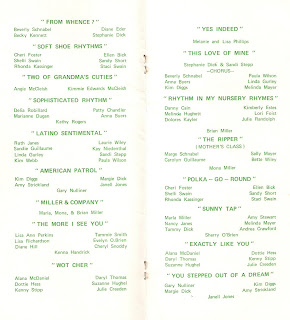 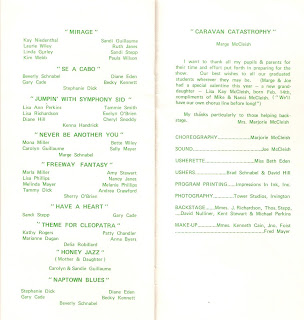 This gem of an artifact reveals many names of Irvington children who tapped and danced their way through childhood. Marjorie McCleish ran a dance studio at 5624 East Washington Street. Her students worked very hard and on June 9, 1973, they performed for their parents and the community at Manual High School. Perhaps some of our readers also took lessons from Mrs. McCleish. Feel free to share your memories! This program is courtesy of Amy Stewart Friedly. Mrs. McCleish's studio has seen several incantations. In 2011, it is the home of Homespun, a shop dedicated to selling local arts crafts.
Posted by Bill Gulde at 4:19 PM No comments:

69 North Irvington Avenue Then and Now 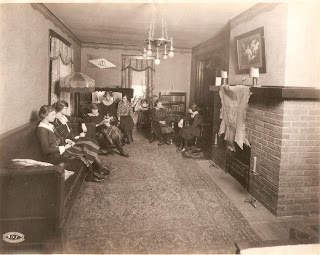 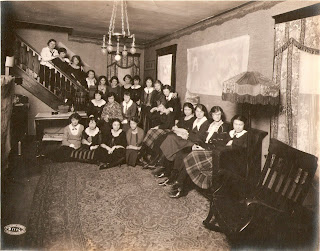 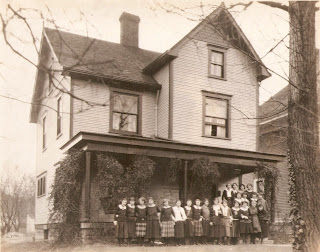 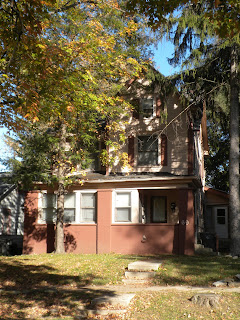 This stately turn-of-the-last-century home has stood in Irvington for well over one hundred years. It has served as the home for many residents as a private dwelling, a sorority house, and in 2011 as apartments. Albert Badger, a barber, and his family called the dwelling home in the 1910s. By the 1920s, a Butler sorority moved in. After World War II, the home was carved up into apartments.