School #77 began on September 6, 1932, to help alleviate the crowding in nearby elementary schools.  With the development of neighborhoods north of Pleasant Run Parkway and eventually along East 10th Street, Indianapolis Public Schools officials scrambled to find classroom space.  The first building was to be temporary, but would serve as a school nearly twenty years on the northeast corner of Arlington Avenue and Pleasant Run Parkway.  The school district built a more permanent structure on the site in 1952.

In these historic photos, likely taken around 1949, school children gather on the front yard of IPS #77. In the top photo, some young women raise the American flag. You will note that they have their hands over their hearts. In the second photo, patrol boys gather on the steps. If you recognize any of these folks then drop me a note at sleeth28@rock.com. The historic images are courtesy of Larry Muncie, a local historian and author.

Charles Dorn, a popular Irvington grocer, operated a Standard Grocery Store on the northwest corner of Brookville Road and Grand Avenue. In this very brief clip, c. 1933, patrons exit and enter the store.  The final scene shows some employees standing along South Grand Avenue.  Behind them, you can see houses on the eastern side of the street (400 block).  I have included a shot of those dwellings in 2012.  This historic film is courtesy of Larry Muncie.

Film Clip of Charles Dorn's Standard Grocery and the Nearby Horner House c.1933

Charles Dorn operated a small Standard Grocery store on the northwest corner of Brookville Road and Grand Avenue. (just east of South Emerson Avenue) Sometime in the early 1930s, a family member or friend filmed Mr. Dorn and some of his workers as they exited the store.  Mr. Dorn can be seen wearing a hat and smoking a cigar.  Larry Muncie, a local historian, remembers going to the store during World War II with his mother Margaret Muncie and his Aunt Gladys Shimer.  During the war years, Mr. Dorn could only carry canned goods because of the rations on meat and other items. Eventually, a Standard Grocery Store would be built on East Washington Street. Mr. Dorn's store still stands today although it has been drastically altered and is now a church.


So you know what you are seeing, I have included a sequential history by clip:

0-5 seconds--The exterior of the store

6-20 seconds--You can see the employees exiting the store and playfully posing for the camera. Behind them, you can see a bungalow on the southside of Brookville Road near Emerson and a brief shot of the Horner House on South Emerson.  Towards the end of this segment, you can see Mr. Dorn standing along the Grand Avenue side.  A small bungalow on Grand is behind him.

22--27 seconds--You can see a young man come from around a bus parked on Brookville Road.  Behind him, you have a clear shot of the Horner House on South Emerson Avenue.

This amazing film clip is courtesy of Larry Muncie. I am working to get rid of the labeling on the film. Contemporary images show the same views in 2012.

Orville and Alice Bowman dwelled in their duplex located at 5755 East New York Street for many years. The couple hailed from Ohio and raised their three sons, Gerald, Deforrest (Forry), and Albert in the house. Mr. Bowman was an insurance salesman.  The Bowman double was valued at $10,000 in the 1930 Federal Census.

In 1943, the Bowman sons gathered for a reunion with their parents.  In the top photo, Deforrest and his wife Marilois and his son, Michael, posed with his brother, Gerald, sister-in-law, Maxine, and his nephew, Richard in the family home on East New York Street.  The families gathered in the dining room for this photo.  Note the wonderful light fixture above the men. 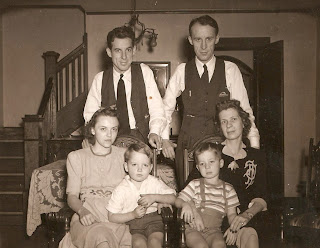 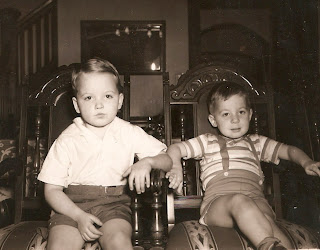 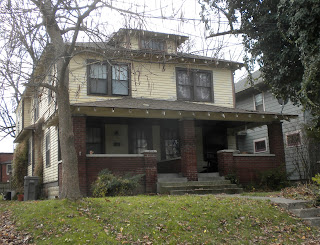 In the second photo, Michael and Richard Bowman, posed for their grandparents in the same home. The contemporary photo, shows 5755 East New York Street in 2012.  The home still retains its original wood clapboard siding and rafter beams.  The historic photos are courtesy of the Bowman family.
Posted by Bill Gulde at 9:02 AM No comments:

Homer G. and Ruth Bonner Meek dwelled at 5809 Lowell Avenue for many years. The 1930 Census reveals that their home was valued at $7500. The Meeks hailed from Greensburg and moved to Indianapolis in the 1920s. Mr. Meek worked for the London Assurances Corporation as an insurance salesman. They raised their daughters Ruth and Marilois in the two-story stuccoed home. Marilois eventually married the boy next door or at least a block away. The Bowman and Meek families joined together in 1936 when Marilois married Deforrest Bowman.

The Bowmans had two children, Michael and Susan, who frequently visited both sets of grandparents. In these photos taken in the late 1930s and 1940s in the backyard of 5809 Lowell Avenue, the Bowman children played with each other or with their parents. I have also included photos of Homer and Ruth Meek when they were young and still living in Greensburg, Indiana.

The historic images are courtesy of the Bowman family.  The contemporary image shows the front of 5809 Lowell Avenue in 2012.
Posted by Bill Gulde at 2:52 PM No comments:

Michael and Susan Bowman loved to visit their grandparents, the Meeks, who lived on Lowell Avenue and the Bowmans, who lived on East New York Street.  In these two photos, the Bowmans gathered on the front yard of the Meek home at 5809 Lowell Avenue.  The home behind the family in the photo is actually 5816 Lowell Avenue.  You can also see the rear of the Dutch Colonial homes along North Bolton Avenue.  Today that view is not possible because a small house has been built obscuring the views of 1948.  In the top photo, Marilois Bowman posed with her two children.   Little Susie Bowman stood upon a landscaping rock.  In the second photo, Michael Bowman showed off his new bike while a neighbor girl (in the scarf) and his sister admired the gift.  The contemporary images, taken in 2012, shows the same views sans the cute children.


The historic images are courtesy of the Bowman family.
Posted by Bill Gulde at 11:05 AM No comments:

Deforrest and Marilois Meek Bowman grew up just a block apart in Irvington and settled down in the neighborhood.  They set up housekeeping at 5218 East Walnut Street after marrying in 1936.  Mr. Bowman was a  businessman and a talented athlete who used to exercise in nearby Ellenberger Park.  Mrs. Bowman was an interior designer.  The couple raised their two children, Michael and Susan, in the large duplex on Walnut Street.   The following photos, courtesy of the Bowman family, show the children in the late 1940s and images of Mr. and Mrs. Bowman.

Mike and Susan Bowman, who lived on Walnut Street, walked along North Ritter Avenue around 1948. Perhaps they were going to school or just out visiting friends or family. They are bundled up and the leaves are gone from the trees. Behind them, you can see 71 and 75-77 North Ritter Avenue and beyond. More wonderful photos will be forthcoming from this interesting Irvington family. The contemporary image of the same view was taken in the autumn of 2012.


The historic image is courtesy of the Bowman family.
Posted by Bill Gulde at 2:23 PM No comments:

November 7, 2012 marked the second anniversary of Vintage Irvington.  It has been my pleasure to post over four hundred historic images of the neighborhood.  Many of those wonderful pictures have come from generous readers like you. I am always eager to post more so keep them coming!  To celebrate, I am including some of my personal favorites from the past two years.  My obsession to document this neighborhood began with the idea of finding historic photos of the homes of Irvington.  You will note that all of the pictures I have chosen captured people.  Thank you, loyal followers and I hope you will join me for another year of documenting this wonderful place we call or have called home.

Bonna Avenue is a small street that runs parallel to the former Pennsylvania Rail Line.  A smattering of modest bungalows sat next to the busy transportation corridor.  The Irvington Depot used to be located along Bonna near Audubon Road.  A few family businesses opened along the narrow brick path as well including E.R. Mullin's Tinner, Furnaces, & Roofing at 5517 Bonna.

Elmer R. Mullin opened his shop in 1924 and served the greater Irvington area until his untimely death in 1943.  The Mullin family lived in a two-story Queen Anne home at 203 South Ritter Avenue.  (see previous post) This historic photo, provided by Robert Montgomery, was taken in April of 1939.  You will note that Mr. Mullin is in his truck and ready to fix a broken down furnace or pipe.  You could reach him by dialing IRV7152.

The last time anyone saw the Fisher-Mullin home was in 1968.  It was torn down in that year to make room for a commercial development along South Ritter and Bonna Avenues. This late nineteenth-century house at 203 South Ritter Avenue was first the home of the Fisher family. Charles Fisher was the Warren Township Trustee in 1910. Later, Elmer R. Mullin, a tinner and furnace man, moved his family into the home and remained there from the early 1920s through the 1940s.


Robert Montgomery, the grandson to Mr. and Mrs. Mullin, recalls the trains which passed by his childhood bedroom window near the Pennsylvania Rail Line.  Seventy years later, he noted that the sound of a distant train reminds him of his childhood years in Irvington. In the historic photo, taken around 1920, you will note that the house still had its fish scales in the upper gables as well as a wonderful Queen Anne porch.  If you look closely, you can see Mr. Mullin's tin shop behind the home at 5517 Bonna Avenue.

This historic photo is courtesy of Robert Montgomery.
Posted by Bill Gulde at 7:44 AM No comments:

A Soldier Poses Next to Former Campus Site--1942

Butler University had been gone from Irvington for 14 years when this photo of Joseph Clark Moffitt was taken in 1942.  All of the main buildings had been torn down by the late 1930s so the area behind him was full of weeds and tall trees.  Developers began building small two bedroom homes on the land shortly after Private Moffitt posed for this photo. Only the Bona Thompson Memorial Library further east is all that remains of Butler's tenure in Irvington. Little is known of Private Moffitt at this moment, but hopefully one of our readers will be able to put us in touch with folks who remember him. 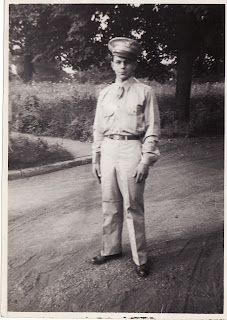 Posted by Bill Gulde at 4:18 PM No comments: