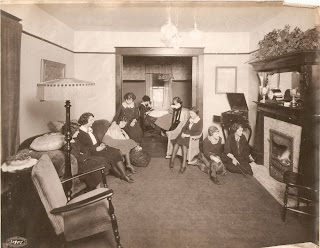 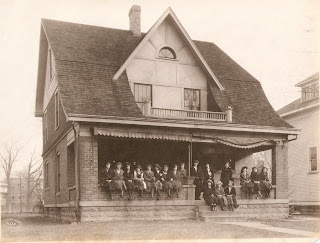 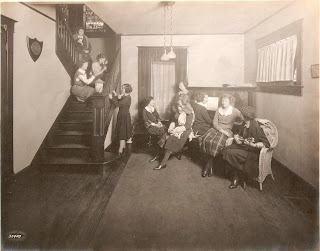 Although this home has been featured before, these new images of 275 South Audubon Road reveal stunning interior shots. The Denvirs were the first to dwell in the house. By 1920, a Butler sorority moved in. The interior shots show the young women next to a beautiful fireplace and staircase. On the landing above the staircase, you will note the stained glass windows. Be sure to note the interesting furniture and lighting. In the exterior shot, you will see the Children Guardian's Home in the rear and the double house to the south of the home. These images are courtesy of Amy Friedly. You may learn more about this house by clicking on the "Denvir" link below.
Posted by Bill Gulde at 6:19 AM No comments: 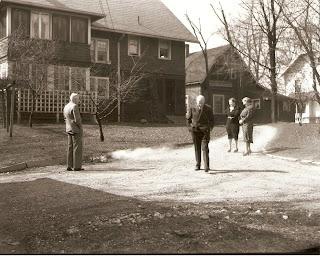 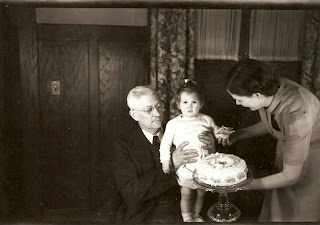 The Hartsock Family lived in 59 North Hawthorne Lane from the late 1920s and into the 1940s. Harvey Hartock, a prominent Indianapolis attorney, and his wife, Bess, must have enjoyed living in this beautiful Gustav Stickley-designed house. In the first of the two images you can see the rear of the home as the Hartsocks gather along the back drive. In the second photo, you will view a child's birthday celebration in the dining room. The exterior photo not only shows most of the rear of the Hartsock house, but also of 63 North Hawthorne Lane. Note the upper sleeping porch on that house. The interior shot is a lovely image of Mr. and Mrs. Hartsock, presumably with a grandchild in their stunning dining room. Notice the dark wood paneling behind them. The cake also looks delicious over seventy years later. These photos were likely taken around 1941 and are courtesy of Brian and Emily Mack. You may learn more about this house by following the Gustav Stickley link below.
Posted by Bill Gulde at 4:22 PM 1 comment:

Young Girl on a Swing 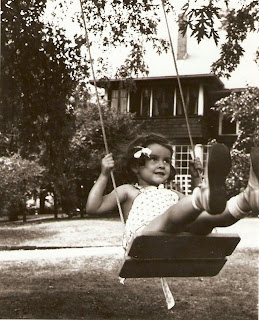 Some of the photos I encounter are worthy of being art. This lovely image of a Hartsock family member could easily be a painting. The Hartsocks dwelled at 59 North Hawthorne Lane from the late 1920s and into the 1940s. Behind the young girl you can see the rear of the home. As soon as I have her name, I shall post it. You may see other wonderful images of children in Irvington by clicking on the "children" link below. This image is courtesy of Brian and Emily Mack.
Posted by Bill Gulde at 1:18 PM 1 comment:

The Hartsock Family of Hawthorne Lane 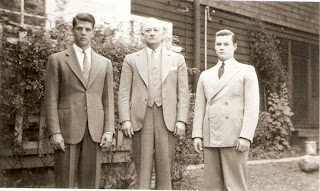 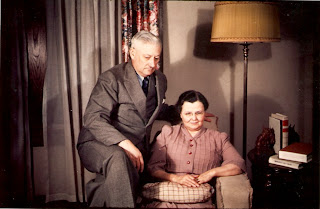 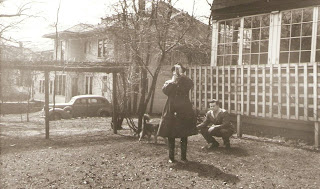 How does one name an old house? Do the first inhabitants get the honor? What about the architect? How about the families who dwell in the home for decades? The current owners of 59 North Hawthorne Lane face just such a dilemma. The Recker Family built this astonishing house, but it was designed by Gustav Stickley. So is it the Recker Home or the Stickley House? And what of the people who came after the Reckers? The home has had remarkable stability. In the late 1920s, Harvey and Bess Hartsock moved in and remained in the house until the 1940s. For years it was known as the Hartsock House. And who were the Hartsocks anyway?

Attorney Harvey Barton Hartsock (1887-1966) hailed from the village of Quincy, Indiana. He eventually graduated from Depauw University and received a law degree from Columbia University. He married Bess Leoti Taylor (1885-1968) in Bartholomew County on April 12, 1912. They would rear four children in both Brooklyn, New York and in Irvington.

Mr. Hartsock made history in the late 1930s when he represented a faction of the neighborhood who wanted to keep the ban on the sale of packaged liquors in place. Irvington had been dry since its founding. In Sorrentino v. Cunningham, Hartsock argued that the covenant forbidding the sale of alcohol should stand. Judge Ernest Stewart agreed with Hartsock and the ban remained in place until the dawn of the 21st century. You may read more about this case in Paul Diebold's Greater Irvington (70).

The photos show a glimpse into the lives of the Hartsock family. In the top photo Mr. Hartsock proudly stands next to his sons Hetzer B. and Robert E. Hartsock. The photo was likely taken around 1939. The color photo of Mr. and Mrs. Hartsock was likely taken in the early 1940s. In the bottom photo the Hartsock brothers playfully pose or snap a photo at the photographer in the rear of 59 North Hawthorne Lane. You also get an amazing view of the rear of 51 North Hawthorne Lane. This photo was likely taken around 1939. More images of this interesting Irvington family will be forthcoming. A special thanks are in order to Brian and Emily Mack for being so generous with these historic photos. You may learn more about the Recker era by clicking on the link below.

Posted by Bill Gulde at 5:07 PM No comments: 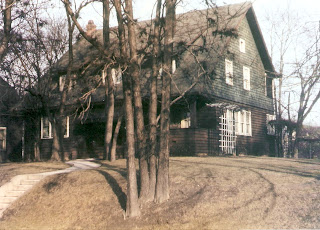 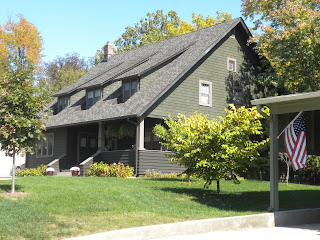 Renown architect and furniture designer, Gustav Stickley is highly admired today. His furniture is worth hundreds and in some cases thousands of dollars in 2011. Only one known Stickley-designed home exists in the state of Indiana and it happens to sit at 59 North Hawthorne Lane in Irvington.

Furniture salesman Carlos Recker (1873-1951) and his wife Elizabeth Anne Butler Recker (1877-1973) likely purchased Stickley's No. 28 plan in 1905. They built their dream home three years later in 1908. It is very possible that Recker sold Stickley furniture in his downtown furniture shop called Sander and Recker Furniture. The furniture company operated in Indianapolis from 1901 to 1935. Mr. Recker also moonlighted as an interior decorator and was sought after by numerous wealthy clients. In addition to decorating homes in the Indianapolis area, he was also commissioned to design the interiors of the Columbia Club, the Indiana and Circle Theaters, and the Indiana Ballroom on Indiana University's campus. In his later years, he was highly sought after to appraise antiques.

His wife, Elizabeth Anne Butler Recker, certainly made her mark on the city of Indianapolis as well. The great granddaughter of Butler University's founder, Ovid Butler, Mrs. Recker served on several committees regarding child labor and poor relief. At the height of the Great Influenza Epidemic of 1918, Mrs. Recker helped to provide quarts of milk to families afflicted by the plague.

The early years of this home's history are filled with stories from the Recker family. They would live in the house for over a decade along with their son Carlos Jr. The couple enjoyed playing bridge and the society pages of the Indianapolis Star document several tournaments in the home. On April 29, 1911, five tables of guests competed in a bridge tournament.

Although Mr. Recker was born in Indiana, his parents hailed from the Baden region in Germany. His father Gottfried was one of the organizers of the Indianapolis Maennerchor Society, a German social group. Carlos and Anne frequently attended masked balls held by the German organization. On February 25, 1911, Mr. Recker donned the costume of "Romeo" while Mrs. Recker dressed up like a Russian peasant girl. Over 200 people showed up in costumes for the ball at the Maennerchor Hall.

The Reckers attended numerous other social events during these years including an opera at the Murat Theater on October 13, 1912. The Indianapolis Star paid close attention to Mrs. Recker's outfit as she wore a "charming toilette of two-toned chiffon in deep rose shades." She also donned a "picture hat of rose velvet with a plume of white ostrich." Her sister, Cordelia Butler, could be seen in a "beige gown of old rose crepe de chine combined with maline lace with pearls and diamonds."

Sadness descended upon the home when Mrs. Lina Kunz Recker, the 73-year-old mother of Carlos, died in the house in early February of 1913. The Reckers held the funeral for Mrs. Recker in the bungalow on February 5, 1913.

Numerous people came to live with the Reckers during their tenure including Mrs. W.H. Tefft and her daughter Julia Anne. Mrs. Tefft was the sister of Mrs. Recker and her husband departed the United States for Europe on May 5, 1918 to fight in World War One. Mr. Recker donated $120 to the War Chest, a campaign to raise money for the war.

By the early 1920s, the Reckers moved out of their fashionable Stickley home for a Tudor Revival house at 3916 North Pennsylvania and finally to 116 E. 36th Street. More research is needed on this talented Irvington family. Carlos Jr. eventually married Elizabeth Royce and moved to Virginia where he died in 1989.

The historic photo was likely taken around 1940 while the Hartsock Family lived in the house. They will be featured in future posts. The current photo was taken on October 8, 2011. The historic image is courtesy of Brian and Emily Mack.
Posted by Bill Gulde at 1:38 PM No comments: 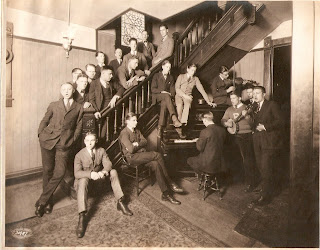 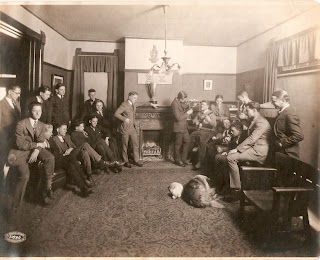 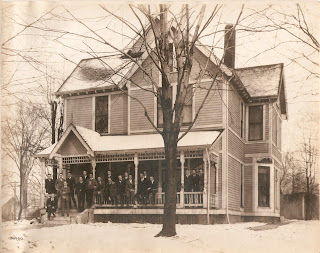 Previous posts have revealed some interesting historic shots of 209 Downey Avenue, but today you shall have an opportunity to see a few incredible interior shots taken in 1919. The home, although built as a private residence, served as a fraternity house for Butler University throughout the 1920s. These interesting photos reveal so many details about the house and the young men who dwelled here.

In the top photo, the Betas gather in the entryway around a piano. I wondered if they wheeled the instrument into the room or whether it always rested there. One young man sings while he is playing the banjo. Seated on the piano, one member plays the violin while two others sing. I presume the rest are to supposed to be singing, but some are and some are not. Note the beautiful late-nineteenth century newell post on the staircase and the stained glass window above them. I also like the wall paper and the the light fixture.

In the second photo, the same group of young men gather in the home's parlor. Dog lovers will immediately note the two pooches resting on the rug. The members have hung important symbols around the room and they have a winning cup resting on the gorgeous mantel piece. Notice the lovely tile surrounding the fireplace. This canned photo also reveals that the parlor appears to be spartanly furnished, but some large heavy pieces of furniture managed to provide a seat for most of the men. Note the wonderful light fixture and the stained glass window.

In the final shot, members gather on the front porch for a group photo. You may learn more about this house by clicking on the "fraternity" or "Downey Avenue" link below. These wonderful images are courtesy of Amy Friedly.
Posted by Bill Gulde at 6:08 AM 1 comment: