Who Lived Here? The Whitney Family of Lowell Avenue

Karl G. and Ella "Gertrude" Potter Whitney moved into 5869 Lowell Avenue in 1920. They were not the first to dwell in the house as at least two other families predated them. Mr. Whitney was a business partner in the Irvington Hardware Store first located at 5505 East Washington Street and later at 5539 East Washington Street. The business was quite successful as the Indianapolis Star reported in 1925 that the partnership had assets of $20,000. In 1926, the forty-year-old businessman sat for a portrait for a book called Fellow Citizens of Indianapolis.  He and his partners eventually got out of the hardware business and by 1929 they sold life insurance. Mrs. Whitney stayed home and raised the couple's two children, Marian and Neil.  The couple continued to dwell in the house for the next thirty years. Their daughter, Marian and her husband John Church, resided in the abode well into the 1960s. 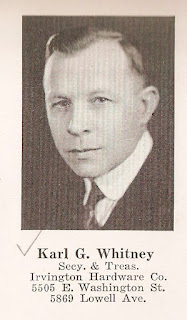 Residents of Irvington awoke to the sad news today that at around 4:30 AM, the former East Side State Bank and now Jack and Jill's Antique Mall at 5501 East Washington Street had collapsed. The top part of the front facade fell onto East Washington Street. The building was constructed during the summer of 1913 and served as a bank well into the 1980s. The future of the building is unclear at this point.

Posted by Bill Gulde at 5:58 AM No comments:

Who Lived Here? The Osborne Family of Poplar Road

In 1925, Thomas C. and Ethel Claffey Osborne moved into their two-year-old home at 411 Poplar Road in the brand new Pleasanton section of Irvington. Mr. Osborne had earned a comfortable living as a broker who distributed fruits and vegetables. The Osbornes dwelled in one of the larger homes in the new suburb of Irvington. Their lovely four-bedroom American Four Square also had a porte-cochère for guests as they pulled into the drive. Many other homes in Pleasanton also had this feature. In 1926, Mr. Osborne posed for a photo for a book called Fellow Citizens of Indianapolis. His business was likely doing quite well during the Roaring 20s. The 1930 Federal Census reveals that the Osborne home was worth $10,000. The couple had two children, a boy and girl, both named after their parents--Thomas and Ethel.

In 1934, at the height of the Great Depression, Mr. Osborne died at the age of 49 in his home. Mrs. Osborne managed to keep the house through these very difficult times. She began working and also moved her mother, Johanna Claffey, into the residence. On Christmas Day in 1938, the Indianapolis Star reported on the joyful wedding of Ethel, her daughter, to the Reverend Joseph Edwards at the Shelby Street Methodist Church. Her new son-in-law and daughter moved into the Poplar Road house. In the following year, her son, Thomas also married and he too brought his new bride back to the house. The 1940 Federal Census reveals a full house! Two married couples, one grandson, along with Mrs. Osborne and her mother now lived in the Four Square. Like most Irvington homes, the Great Depression had affected the value of the home as it dropped to $7,000 in 1940.

Mrs. Osborne married a man named William Mize and continued to reside at 411 Poplar Road until 1953. City directories reveal that after this date she lived alone and on Emerson Avenue. She died in 1972. 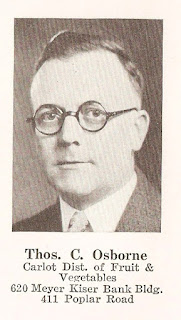 Posted by Bill Gulde at 9:13 AM No comments: