Stafford Engraving, managed by Charles Hackleman (34 N. Ritter Avenue), produced several images of Irvington in the early twentieth century.  In this postcard, a photographer--perhaps Mr. Hackleman-- captured three important structures in 1910.  Both the Bona Thompson Library and School #57 had only been standing for about six years.  The Engine House used to sit on the north side of East Washington Street across from School #57 near Whittier Place.  The house visible behind the Engine House along Whittier Place was demolished many years ago.

Posted by Bill Gulde at 6:25 PM No comments:

The Dirks family operated a grocery store along East Washington Street for much of the twentieth century.  Edward Dirks, Sr. moved to Irvington in the early 1910s and opened a store at 5548 East Washington Street.  Later, as his business expanded, he moved into 5524 East Washington Street.  Both structures are now gone.  The store is mentioned in several of the oral histories conducted in the 1970s and 1980s by the Irvington branch (Hilton U. Brown branch--in those days) of the Marion County-Indianapolis Public Library. Local Irvingtonians recalled dialing up Mr Dirks on their phones to place an order.  His staff, generally local high school students and young men, would get in a wagon or a car and drop off the groceries.  Neighbors could walk to the store and choose vegetables and meat, but most items were behind the counter so the process was quite time consuming. Even after larger stores like Standard Grocery and others came into the community, Dirks continued to thrive.  Store loyalty was very high in those days.

Throughout the 1920s, Butler University students shopped at the store.  On the night of February 2, 1923, several college students heard a thump inside the closed store and peeked into the windows.  One student thought he saw two white guys and an African-American male.  Assuming they were burglars, a crowd soon gathered.  One hundred college students surrounded the store in case the burglars tried to flee.  The police showed up and entered the store.  Officers exited the building with a cat.  The incident garnered front page news the next morning and likely elicited a few chuckles around the city.

Edward and his wife Anna Bloemker first dwelled in a two-story home at 24 North Ritter Avenue.  He built a large barn behind his house in 1914 to house his delivery vehicles. As his fortunes rose, Mr. Dirks moved his family into a spacious brick American Four Square at 50 N. Kenmore Road.  The couple had three children, Mildred, Helen, and Edward, Jr. Young Edward would take over the family business in the early 1950s until he finally sold it in 1966.  Ask any mid-twentieth-century resident of Irvington and you will hear stories of shopping at Dirks.

In the top two historic images, courtesy of the Larry Muncie Collection from the Irvington Historical Society, you can see two deliverymen ready to begin their routes.  Mr. Muncie has zoomed in on one of  the men so we can see his face.  The third historic image is an advertisement that came out of the 1927 Drift, a Butler University yearbook. 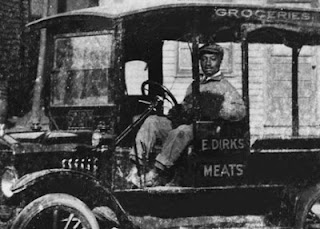 The contemporary images show the Dirks homes in 2013.  24 North Ritter Avenue was moved in the early 1930s to its current location in the 300 block of North Ritter.  The previous site was needed for commercial expansion.  The last image shows the beautiful home at 50 North Kenmore Road where the Dirks dwelled throughout much of the twentieth century.  The house still retains its beautiful roof tiles.

Posted by Bill Gulde at 8:36 AM No comments:

The organization remained strong in the neighborhood throughout the twentieth and into the twenty-first century.  In this historic image, members of Troop Ten gathered at the Irvington Presbyterian Church for a club photo in 1943.  According to Ann Hart Stewart, a member of this troop, girls learned to knit, cook, and camp.  Seventy years later, Ms. Stewart fondly recalled that the scouts made a deep impression upon her.  The young women sold cookies and one year they also offered malted milk balls!

Thankfully, we have the names of the girls in this photo courtesy of Ann Hart Stewart, one of the young women in the front row. I have also noted the addresses of some of the girls. 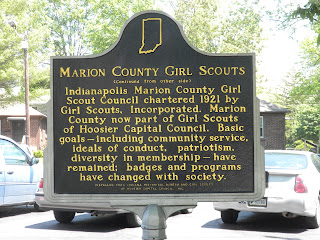 Posted by Bill Gulde at 5:51 PM No comments:

Irvington Presbyterian Church Then and Now

Two different artists captured the Irvington Presbyterian Church shortly after the construction of the current building in 1928.  Photographer W. Frank Jones snapped a shot of the church c1930.  Then, local etcher and illustrator Frederick Polley (371 South Emerson Avenue) sat down with his pad and sketched the building for the Indianapolis Star in the winter of 1930.  Mr. Polley, a well known artist and teacher at Arsenal Technical High School, was widely known around Indiana and the nation for his architectural drawings.  Each Sunday, thousands of Hoosiers read his blurbs about Indiana landmarks complete with his original illustrations.  Since he called Irvington home, several landmarks including the Irvington Presbyterian Church were featured in the paper.  Mr. Polley's family is working on a biography of this talented and interesting Irvington artist.  Little is known of the photographer, W. Frank Jones, so if any of our readers can offer insight then drop me a note at sleeth28@rock.com.  The historic photograph of the church is courtesy of Bob Alloway.

Posted by Bill Gulde at 9:14 AM No comments:

I love it when readers respond to posts.  After reading my most recent blurb on Ellenberger Park, Don Rouse, a frequent contributor to this blog sent in some wonderful images of the park from 1943.  His mother, Christine Bruckman, worked at the Missions Building at 222 Downey Avenue.  She along with two of her coworkers trekked to Ellenberger Park in April of 1943 to take a few photos.  Mr. Rouse also included a few Bruckman family shots from 1943. The park has changed significantly since those days.  You will note that there are more trees along the stream today and that the old wooden bridge has been replaced.  Thank you, Don Rouse for your timeliness!

The city of Indianapolis purchased several acres of woods from John Ellenberger for a city park in 1910.  The neighbors loved the forest and had been using it for years.  When it came time to pay for the site in the form of an assessment, some neighbors fell out of love and vociferously protested; however, the naysayers did not hold the day and Ellenberger Park remains a valuable green space in the twenty-first century.

Shortly after the purchase of the woods, the city hired landscape architect, George Kessler, to develop a boulevard system throughout Marion County.  One leg of his design included Pleasant Run Parkway.  Kessler envisioned a beautiful drive along the stream and he planned to incorporate the park into his plan.  As this photo demonstrates, Kessler clearcut most of the brush and trees near the stream.  In his vision, the driver or stroller would saunter down a lovely paved road and be able to see the meandering stream nearby.  Nature would be tightly controlled and yet be an integral part of the experience.

By 2013, a new vision had emerged.  Irvingtonians have spent much time replanting native trees, grasses, and flowers along the stream.  Like Kessler, they have strived to control nature by removing invasive species, a never-ending Sisyphean feat.  A special thanks to Bob Alloway for the use of this historic image.  Mr. Alloway has an extensive collection of historic postcards of Indianapolis and Irvington.
Posted by Bill Gulde at 5:02 PM No comments:

The Irvington Presbyterian Church has been an important institution in the neighborhood since the early twentieth century.  Located along Johnson and Julian Avenue since 1908, the congregation has met in the current Gothic structure since 1928.  Weddings, baptisms, funerals, holidays, and special ceremonies have made this one of the most documented structures in Irvington.  Photographs, church programs, newsletters, and other ephemera about the church have survived the decades and now sit in scrapbooks and file cabinets.  Today's historic image documents a candlelight service held in the church in 1950.  Chuck Vogt and another unidentified boy were responsible for the official lighting ceremony.  Contemporary photographs reveal that the structure is just as beautiful as when it was first built over eighty years ago. 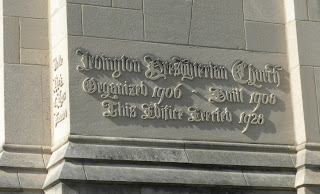 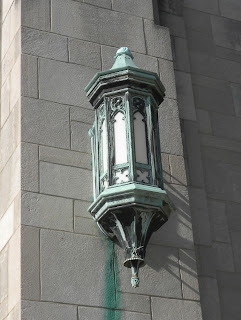 The historic image is courtesy of Chuck and Joyce Vogt.
Posted by Bill Gulde at 5:41 PM 2 comments:

Cartoonist and humorist, Kin Hubbard (1868-1930), moved his family into this beautiful home at 5070 East Pleasant Run Parkway in 1907.  He had made enough money from his syndicated cartoon strip Abe Martin to build this beautiful home.  Eventually, the dwelling would vanish behind a canopy of trees and tall shrubs.  As his fortune grew, Mr. Hubbard moved out of Irvington and into a mansion along North Meridian Street.  His biographer noted that Mr. Hubbard tended to shun public appearances and radio broadcasts and he enjoyed working in his garden and being with his family.  His rube character, Abe Martin, dwelled in a fictionalized Brown County and was very popular all over the US for his folksy statements on life.  Many of those "witty" comments have not passed the test of time, but he was loved in his day. The top image shows the home shortly after its construction (c1910).  The second image, taken in 1923, shows the home with its lush landscaping. The bottom image was likely taken in the late 1920s or perhaps into the 1930s and is courtesy of Bob Alloway.  You may learn more about Kin Hubbard by clicking on the link below.  The beautiful home still stands today.

Posted by Bill Gulde at 3:10 PM No comments:

It was time for the city of Indianapolis to resurface the 5700 block of Julian Avenue as it had been in bad shape.  Under the layers of asphalt, the beautiful brick street that served the neighborhood started to appear.  Most of Irvington's streets used to be brick so the fact that workers uncovered this material is not surprising.  What might surprise some residents is the fact that this section of Julian Avenue used to have a streetcar track! Streetcars used to come down South Audubon Road to the commercial corridor in the 200 block.  Since there was only one track, the cars would have to back up on the same line. Conductors would then back onto Julian Avenue so they could turn around and return to East Washington Street.  If you look closely, you can see the ghosts of this former small section of track on Julian Avenue.  Irvington residents should walk over and view the street quickly as new asphalt will soon cover this piece of history for another fifty to one hundred years.  The Irvington Historical Society has a photo of a streetcar on Julian Avenue (1914) on display in the Bona Thompson Building.

Posted by Bill Gulde at 8:30 AM No comments: