Who Lived Here? The DeJarnatts of Rawles Avenue

Rawles Avenue sits along the southern edge of Irvington. The Baltimore and Ohio Railroad abuts the properties all along the street.  Most of the housing stock in this area tended to be smaller and less grand than the rest of the neighborhood likely due to the proximity to a major rail line. The bulk of the construction along this street came in the 1910s and 1920s.  Matthew Frank and Gertrude DeJarnatt moved into their brand new bungalow at 5826 Rawles Avenue in 1925. Mr. DeJarnatt was really at the apex of his career as he served as the Chief of the Income Tax Division for the Internal Revenue Service in Indiana. In 1926, the forty-six-year-old accountant submitted a photo for a book on prominent residents called Fellow Citizens of Indianapolis. Mr. DeJarnatt had been involved with Republican Party politics in the Evansville area and moved to Indianapolis to take on his new position. Mrs. DeJarnatt passed away in 1933 at the age 52.  It was at this point that Mr. Dejarnatt decided to leave Irvington. He died in 1939 and was buried in Memorial Cemetery next to his wife. Numerous other people have called the modest bungalow "home" over the decades since the DeJarnatts first dwelled here. 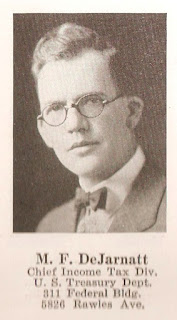 Posted by Bill Gulde at 9:44 AM No comments:

Carrold and Blanche Bastin Stevenson leased a double at 72 South Audubon Road from 1943 until 1951. Mr. Stevenson was a pipe fitter and later a foreman for the New York Central System Rail. The Stevensons had extended family members living in Irvington. They would eventually move to Euclid Avenue just west of the neighborhood. Photos likely taken by Mary Stevenson of 112 Johnson Avenue not only show family members, but also nearby houses. Joanne Stevenson, the daughter of Carrold and Blanche Stevenson, was the subject of many of the photos. Another family member, Ted Lollis, who lived at 5866 Julian Avenue, can be see with Jerry Land. Behind the boys you can see the Layman mansion at 29 South Audubon Road as well as homes at 55 and 61 South Audubon Road.


To learn more about the extended Stevenson/Lollis or Layman family click on the links below. The historic images are courtesy of Ted Lollis.

Posted by Bill Gulde at 7:49 AM No comments:

Who Lived Here? The Wishards of Oak Avenue

In 1918, Dr. Ernest Elmer and Mary Bickell Wishard moved into 5828 Oak Avenue. The couple had been married for eighteen years and they had three children.  They had previously dwelled at 5514 University Avenue. Dr. Wishard was not only a physician but also a chemist and he worked for Eli Lilly & Company. Mrs. Wishard was an Irvington club woman and she frequently hosted the Irvington Home Study Club in her Oak Avenue bungalow.  At least one child, Lois, graduated from Butler University in 1924. She was an English major. In 1926, fifty-year-old Ernest Wishard posed for this photo which appeared in a promotional book called Fellow Citizens of Indianapolis.  By 1930 the family had moved away from Irvington for new opportunities in Minnesota.  Dr. Wishard died in 1935 at the age of 60, while Mrs. Wishard passed away at the age of 96 in 1972. 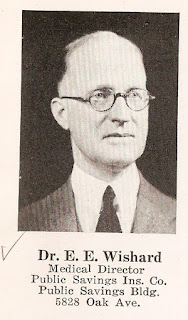 Posted by Bill Gulde at 2:04 PM No comments:

Upon the Rock Then and Now

Mary Margaret Ham lived all over the United States as her father was in the military. In the late 1920s, she came to Irvington to live with her Aunt Guinevere Ostrander at 323 North Audubon Road so that she could attend Butler University.  Sometime around 1929 she posed for this photograph in the front yard of her adopted home. Behind her you can see the family Hupmobile and beyond that you can see the home of Elmer and Emma Hughes at 326 North Audubon Road.  Mr. Hughes taught at Shortridge High School as did his adult daughter, Leda, who also dwelled in the house. Miss Ham was dressed in riding attire that day and welcomed Ginger the dog into the photo.

Amazingly, in 2015 you will note that the rock that Miss Ham sat upon for the photo still rests in the same spot nearly 90 years later. The Hughes home is still lovely although there have been some small changes over the years including the removal of an upstairs dormer and the railings at the upper story windows.


The historic image is courtesy of Nancy Ostrander.

Who Lived Here? A University Avenue Cottage in 1926

In 1926, several thousand city residents submitted a photo to a publication titled Fellow Citizens of Indianapolis. (Jno. V. Coffield Publishing Company, Indianapolis) Most were men and all were white. Many of the citizens featured were rising stars in their profession. Irvington was well represented in the publication with dozens of names. Many of those individuals will be shared on this site.

Floyd Raymond Fisher (1892-1977) was just in the beginning of his career when he submitted his photo to the publication.  A manager for the American Central Life Insurance Company, Mr. Fisher had only recently married Elizabeth Louse Parker (1894-1989) in 1923. He likely purchased 5720 University Avenue in 1922 as a building permit record shows that he placed a furnace in the home in September of 1922. He might have also added on the Craftsman-era porch onto the small Queen Anne cottage.  By 1924, Mr. Fisher moved his wife into the house and shortly thereafter they welcomed their first son, Parker, who was born in the same year.  They would later have a second son, Floyd, Jr.

Their Irvington home was clearly just a starter house as Mr. Fisher continued to rise through the ranks of American Central Life. They left 5720 in 1930 for another 5720. Their next home was far grander and located at 5720 North Delaware Street.

If any member of the Fisher family has any photos of their time in Irvington, please contact me! 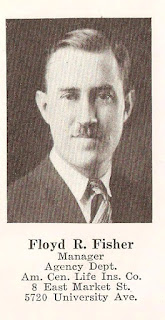 Posted by Bill Gulde at 9:38 AM No comments:

Growing Up Along Audubon Road

Nancy Ostrander and Eva Ruth Ham grew up as sisters at 323 North Audubon Road. They were, however, not actually sisters.  Eva Ruth's mother died in Cuba in 1926. Her father, Thaddeus Cooper Ham, could not cope with an infant so he sent the young girl and her Cuban nanny, Esperanza Rodriguez, to live with his widowed sister in Irvington in 1927. Guinevere Ostrander raised Eva Ruth and her biological daughter, Nancy, in the beautiful home along Audubon. The girls attended School #57 and later Howe High School.  During the Great Depression, Nancy and Eva played at the homes of several neighbors although sadly they noticed that some of their friends had to move away because their parents could not pay the mortgage. The girls were particularly close to the Lavelle sisters who dwelled in a beautiful Prairie-styled home at 5720 Lowell Avenue. Other childhood playmates included the Hughes and Schultz kids. Both Nancy and Eva Ruth grew up to become successful women.  Eva Ruth matriculated to Indiana University while Nancy graduated from Butler University. Both girls moved away from Irvington although their mother and nanny remained in their childhood home.  Eva Ruth married and started a family.  Nancy lived all over the world as she worked for the U.S. Department of State.  In 1978, she was appointed by President Carter to serve as the U.S. Ambassador to Surinam.


The historic images are courtesy of Nancy Ostrander.
Posted by Bill Gulde at 12:24 PM No comments: