Sometime in the late 1930s or early 1940s, Dr. Henry Schmidt of 5702 Pleasant Run Parkway North Drive put up wallpaper in the family's dining room.  Early Americana on wallpaper was quite popular in the mid-twentieth century. Dr. Schmidt likely purchased the mass-produced mural from a local store or a catalog. For years, members of the Schmidt family treasured the scene. In the tableaux, you can see a two-story colonial home surrounded by shrubbery and a fence. In front of the house and along the road, people sit in a horse-drawn carriage. Nearby, you can see a church steeple. The idealized image is similar to the earlier and popular Currier and Ives prints of the late nineteenth century. As the image began to fade, members of the family carefully and artfully touched up the colors. Thankfully, the Schmidt family documented the wall as the mural-paper was later removed.   (Editor's Note: The address of 5702 Pleasant Run Parkway North Drive changed to 5701 East St. Clair Street in the mid-1960s.)

Little research seems to have been done on mass-produced twentieth century wallpaper, but the Old House Journal did publish an interesting overview recently. I have included that link. I am indebted to Ann Schmidt Brown and Doreen McGuire Crenshaw for providing the stories and photos.

When Ann Schmidt of 5702 Pleasant Run Parkway North Drive joined a local Brownie Troop in the early 1940s, she became part of a tradition that had been in the neighborhood for decades. Her particular group met at the Irvington Methodist Church. The girls gathered regularly and usually made some kind of craft. Ann Schmidt Brown still has a sunflower pin cushion she created as a Brownie over seventy years later.

In this photo, we have identified several of the girls, but not all. If you know of additional names for this photo, please contact me at williamfranklingulde@gmail.com. We are estimating the date to be 1942, but let us know if we are off on the date as well.

A special thank you to Ann Schmidt Brown and Doreen McGuire Crenshaw who opened their scrapbooks and memories to me.
Posted by Bill Gulde at 5:15 AM No comments:


Winter in Irvington has always been a beautiful time to grab the camera and capture the newly-fallen snow. The Schmidts, who dwelled at 5702 Pleasant Run Parkway North Drive, filled their scrapbooks to document these moments. Dr. Henry and Isabelle Early Schmidt moved into the house in the latter part of 1937 and immediately fell in love with the acreage on a winter's day. Their children, Ann, Maureen, Carl, Pat, and Jill had the perfect sledding hill as the property sat high above the Pleasant Run stream.  Fallen logs, gorgeous evergreens, and even their pretty bungalow all provided opportunities to capture the serene quiet around them.


I am indebted to Ann Schmidt Brown and her daughter, Doreen McGuire Crenshaw, for opening their scrapbooks and memories for this post.

Posted by Bill Gulde at 3:14 PM No comments:

A Perfect Place to Grow up

When Dr. Henry and Isabelle Early Schmidt purchased 5702 Pleasant Run Parkway North Drive in 1937, they only had one child. Over the course of a decade they would add four more. Ann, Maureen, Carl, Pat, and Jill Schmidt had the perfect yard for a playground. In the winter, they could sled down the giant hill in their front yard. In the warmer seasons, they could explore the woods and nearby Pleasant Run. Family pets also had plenty of acreage in which to run. Photos taken in the 1930s, 1940s, and 1950s reveal some of the fun that children had while living on the property.

I wish to thank Ann Schmidt Brown and her daughter Doreen McGuire Crenshaw for their kindness in allowing me to scan photos from their scrapbooks.

Posted by Bill Gulde at 8:17 AM No comments:

The Schmidt Family Arrives in Irvington

Dr. Henry Schmidt and his wife Isabelle Early Schmidt purchased the beautiful bungalow at 5702 Pleasant Run Parkway North Drive in 1937. The pretty home situated on a bluff overlooking the boulevard and stream had been designed and built for the Jenney family in 1922. The Jacksons and Marions had also dwelled here before the successful 27-year-old optometrist and his wife moved onto the property. The Schmidts already had one daughter by 1937 named Ann and would have four more children: Maureen, Carl, Pat, and Jill. The children had the most amazing yard in which to play. A side porch offered stunning views all seasons. The Schmidt children grew up with dogs who also had the run of the acreage. Family photos from their early years in the house, reveal the lovely setting as well as the close friends and family who stopped by for a visit. The Schmidts remained in the house until the early 1990s.

I am indebted to Ann Schmidt Brown and her daughter Doreen McGuire Crenshaw who opened their scrapbooks and memories to me.

Editor's Note: To learn more about the earlier eras of this house click on the Jenney Family link below. Today the house now has the address of 5701 East St. Clair Street.
Posted by Bill Gulde at 2:35 PM 2 comments:

In the early spring of 1950, eighth graders gathered on the lawn of IPS #57 for their special graduation photo. Most of the kids later attended Thomas Carr Howe High School in the fall. While we do not know the name of every child in the photograph, we do have several of the names. Contact me at williamfranklingulde@gmail.com to add or correct any names. This photograph has been scanned thanks to Bill Sohn, a member of this class.

Growing Up Along Downey Avenue

Anton and Ruth Fulton Sohn, who resided at 378 South Downey Avenue, had four children named  Annalouise, Anton Paul, William (Bill) Peter, and Robert Fulton Sohn. The family's modest bungalow became a gathering site for many of the neighboring children; however, the entire area served as their playground in the late 1930s and throughout the 1940s.


As the children grew older, they were allowed to wander farther from their home. The Sohn brothers, Anton and Bill, loved to visit two nearby "woods." The first plot of nature was actually across the street from their home on the north west corner of Ritter and Downey Avenues. The forested lot belonged to the Stultz family at the time who lived next to the woods at 340 South Ritter Avenue. The second natural area stood east of Ritter Avenue, south of Burgess Avenue, and north of the Baltimore and Ohio Railroad. Later this area would be developed into a small subdivision. The wooded plots served as the perfect place to explore nature. Both boys later joined the Boy Scouts.

Although forbidden, the grounds of the former Butler University also proved to be an enticing to visit. By the late 1930s, the campus had been abandoned and some of the empty structures proved to be perfect places to explore and have egg fights with other neighborhood boys. Dr. Anton Sohn described the abandoned college in his family memoir titled, The Straight and Narrow (1992):

In the 40s the campus was in ruins: there were two buildings, twenty-five acres of hills and rouble, and a caved-in well. In one of the three story classroom buildings was a small apartment--the rest of the structure was in shambles--where a caretaker and his family lived. They shared the building with hundreds of pigeons.

The nearby Baltimore and Ohio Railroad and many of the local businesses associated with that line also proved intriguing for the neighborhood kids. During World War II, the children would run to the tracks to wave to troops who were passing through Irvington on their way to or from the war. A nearby apple orchard along Burgess Avenue also provided some delicious and healthy snacks.

In 1950, Mr. Sohn allowed the construction of a new basketball court towards the rear of their lot. The entire endeavor seemed to be a community event as even a nearby neighbor, George Harris, who resided at 364 South Downey Avenue and worked for the telephone company, provided the goal post. The court became so popular among the neighboring boys that occasionally the Sohns had to wait in line to get court time. Later, Bill wired up a light so that they could also play at night. Both the concrete pad and the telephone post still remain in 2019. 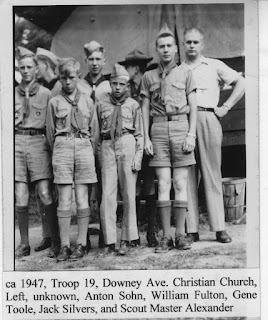 The Sohn brothers along with their cousin William Fulton were very active with the local Boy Scouts. (photo and names courtesy of Anton Sohn)

Their neighbors, the Wickliffs, Kirkhoffs, the Harrises, and the Masters and others are all gone now, but their memories recently came back to life as Bill Sohn and I strolled along Downey Avenue on a beautiful June morning in 2019. We stood in front of the former Sohn home and Bill told me of the giant willow, walnut, oak, silver maple, and catalpa trees that used to be on the lot. A medical facility now stands across the street where the small grove of trees used to be. The alley next to their home is still gravel just as it was over seventy years ago. We chuckled as we spoke of one former neighbor who had no patience for children as she constantly shooed them away from her yard. On this morning, Downey Avenue was quiet with the only noticeable sounds coming from the cardinals and robins who, like us, were out enjoying the morning.

I am indebted to Bill and Anton Sohn, who opened both their photo collections and memories to me.

Posted by Bill Gulde at 9:07 AM No comments: