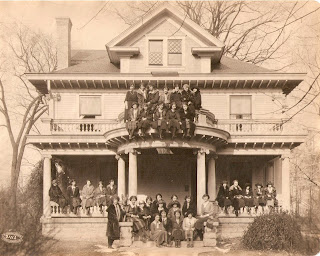 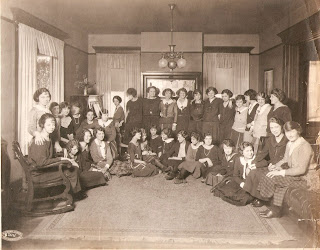 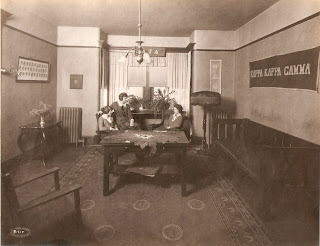 Before it was known as the infamous D.C. Stephenson Home (Grand Dragon of the Ku Klux Klan in the mid-1920s), 5432 University served as the private residence for the Graham Family. By the early 1920s, the Kappa Kappa Gamma Sorority leased the home. In these photos taken around 1920, the young ladies pause for three photos. Notice that porch used to be very tasteful. Stephenson had the porch ripped off when he purchased the dwelling and added two-story columns to resemble the White House. You may read more about his era by clicking on "DC Stephenson" below.

In the top photo, the entire Kappa membership gathered for an exterior photo. The two remaining photos show some of the members in two of the parlors. Note the wonderful light fixtures, dark woodwork, and heavy furniture. These images are courtesy of Amy Friedly.
Posted by Bill Gulde at 6:12 AM 2 comments: 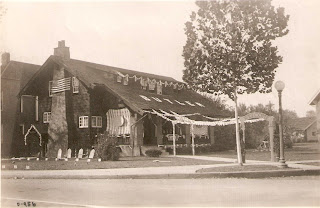 This fraternity house located at 5020 East Washington Street looks very festive for the Butler University Homecoming Football game in 1920. Notice the mock tombstones for the opposing team and the large American flag nailed over the fireplace chimney. A young sycamore tree is still leafed out along Pleasant Run Parkway and is starting to tower over the wonderful street light. This image is courtesy of Amy Friedly. You may learn more about this house by clicking on the "fraternity" tab below.
Posted by Bill Gulde at 5:29 PM No comments: 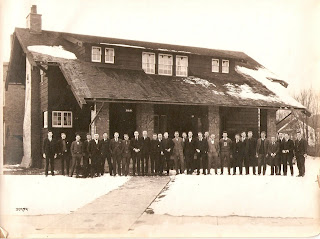 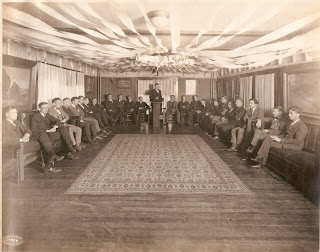 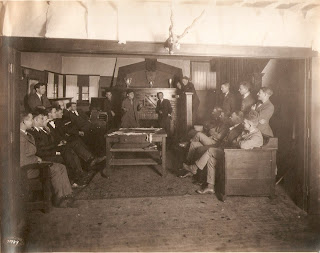 These stunning photos show a Butler University fraternity house and its members in 1920. A previous post of this home may be seen by clicking on the label "Butler." There are so many things I love about these photos. Notice the woodwork, the furniture, the fireplace mantel, and the clothing on the young men. In the bottom photo, a young man appears to be pontificating to the members. Notice the animal hide on the table in front of him and the animal head hanging above the woodwork. One person leans against a Victrola. These wonderful photos are courtesy of Amy Friedly, the great great granddaughter of Hilton U. Brown, Jr.
Posted by Bill Gulde at 1:40 PM No comments:

The Kile Oak as Art 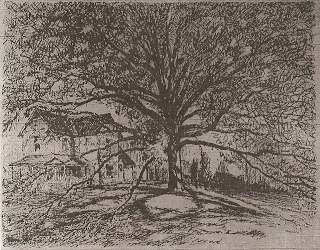 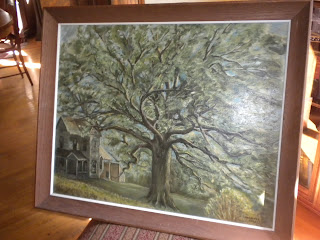 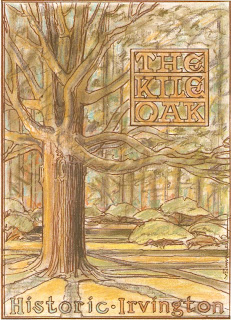 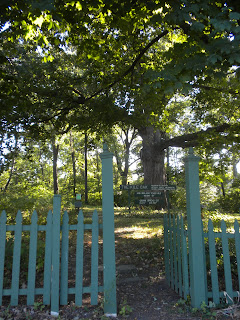 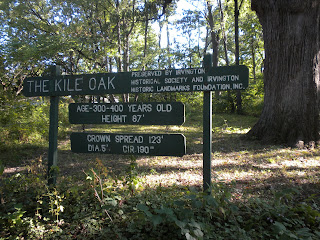 Irvington is extraordinarily proud of the Kile Oak, one of the oldest trees in the state of Indiana. Located on Beechwood Avenue near Arlington Avenue, the majestic white oak has towered over the area for nearly 400 years. Irvington has only been part of that story for about 140 years. I have often wondered about the native peoples who might have seen it prior to the arrival of the nineteenth-century white settlers. Who were they? Did they notice it? Perhaps the tree was part of a forest.

Named for an Irvington family, the Kiles lived in a nineteenth-century home just east of the tree at 5939 Beechwood Avenue. The home is no longer standing. The Reverend Oliver Kile was a Civil War veteran and he requested that his funeral service be conducted under the beautiful tree. In May of 1924, dozens of members of the Grand Army of the Republic (GAR), came from all over the state to assist with his funeral. Most of the soldiers who attended his funeral were themselves elderly Civil War veterans. Mae L. and Lois Kile also dwelled in the large home next to the tree.

Today the home is gone, but the lot and the tree are protected by the Irvington Landmarks Foundation. The site has been declared a natural habitat so nature has begun to reclaim parts of the parcel. Several artists over the years have been inspired by the towering tree.

In the first image, Frederick Polley (1875-1957) sketched the tree for the Indianapolis Star on August 1, 1926 (p.8). He worked in the Graphic Arts Department for Arsenal Technical High School from 1917 to 1941. Mr. Polley, who also happened to dwell at 371 South Emerson Avenue, sketched Indiana landmarks and his work and stories appeared in the Indianapolis Star from 1924 to 1947. This talented artist deserves more recognition. In his sketch, you can also see the Kile Home.

In the second work, Patareka Korbly has painted a beautiful oil color of the Kile home and tree. Little is know of this artist so any help from the general public would be most appreciated. The Korbly family dwelled at 425 N. Audubon Road and at 5814 East Pleasant Run Parkway North Drive in the 1940s and 1950s.

Contemporary artist Wayne Kimmell, who sadly just passed away, painted a wonderful rendition of the tree shortly before his untimely death.

The photos show the tree as it appears in September of 2011.
Posted by Bill Gulde at 9:40 AM 2 comments:

Butler's Oratory and Debate Team pose for a photo in the autumn of 1908. They were stronger in debate than in oratory winning several championships throughout the year. Only Sommer Robinson placed in the oratory category in a meet. Behind the young men on the wall of the classroom building you can barely see "04" painted on the bricks. It is doubtful that the Butler administration was pleased with this graffiti. 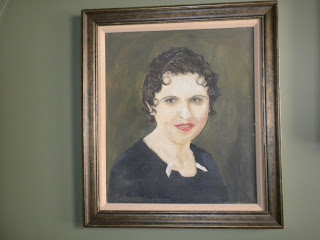 Chester L. Stokesberry (1895-1984) dwelled at 352 Burgess Avenue for decades. Mr. Stokesberry was one of the many talented artists to call Irvington home. While he specialized in landscapes, he also painted portraits. Relatives of Mr. Stokesberry have confirmed that the woman in the portrait is not his first or second wife. Much like the Mona Lisa, we shall just have speculate as to whom she might be. This painting was completed in 1933. You may learn more about the Stokesberry family by clicking on the link below.
Posted by Bill Gulde at 6:34 PM 2 comments: