In the summer of 1950, three paperboys, Philip Pagett, Duane Whipple, and Chuck Vogt were riding their bikes on South Audubon Road near East Washington Street when they heard the train whistle for the Pennsylvania Railroad.  The boys were in route to the commercial area in the 200 block of South Audubon Road to pick up the Saturday edition of the Indianapolis Times.  Sixteen-year-old Philip Pagett called out to his younger friends to speed up so they could race the train.  Both Duane Whipple and Chuck Vogt, who were in the eighth grade at School #85, made the decision not to race the train.  Philip Pagett, a sophomore at Howe High School, thought he could do it.  He soared ahead of the boys and at full speed tried to fly over the tracks in the 200 block of South Audubon Road. Tragically, he never made it.  The other boys still about a block back watched in horror as the train struck and killed Phil.  Needless to say, his family was devastated and the neighborhood was shocked.  Mrs. Pagett was a well-known teacher and local artist. The Irvington Historical Society now displays some of her work.

About a month after the accident, Chuck Vogt returned to the scene and took this photo of the area where young Phil lost his life.  The picture is particularly eerie because another photo has bled onto the negative and produced the ghost-like images on this picture.  The tracks are now gone and the building with the gabled roof is no longer standing.  Philip Pagett is buried in Washington Park Cemetery.  He would have been 80 years old if he were still alive today.

The Vogt children (5733 Oak Avenue) and the Hecker children (5729 Oak Avenue) grew up together in the 1940s and 50s.  In this candid photo, taken in 1948, the neighboring boys have set up a makeshift tent in the front yard at 5729 Oak Avenue.  Towering above them, a giant oak tree with its wide limbs likely made for an interesting silhouette against a moonlit sky.  Chuck Vogt was an active member of the Cub Scouts so he was likely the architect of their nightly abode.  The Vogt home at 5733 Oak Avenue is in the background of the photo.

The students and faculty of Butler University had been gone for seven years by the time the Bailey family posed for this photo in 1936.  Willa Sammis Bailey and her children David and Mildred gathered at the Sammis home (her parents' home) at 256 South Emerson Avenue.  Although they are the subject of this photo, the ghostly image of the abandoned campus stands behind them.  Within four years, most of the campus would be demolished for housing.


I am especially grateful to David Bailey, a regular contributor to this blog, who keeps finding these amazing shots from his family collection.  To learn more about this family or to see other images of the campus click on the links provided below.
Posted by Bill Gulde at 1:04 PM 2 comments:

The Milk Truck on Beechwood Avenue--1948

Milk products used to be delivered to nearly every house in Irvington.  Residents placed a metal box on their porch and awaited the deliveryman.  The milkman would arrive at the home and either find a note on the box or a person at the door informing him of what they would need for the week.  In this photo, taken in 1948, neighborhood kids along Beechwood Avenue posed for a photo after asking for shaved ice on a hot summer Indiana day.  The truck was parked in front of the Muncie family home at 5831 Beechwood Avenue.  I have also included a historic photo of the bungalow taken about the same time. These historic images are courtesy of Larry Muncie.

By the late 1920s, southern Irvington was largely developed.  With the construction of numerous homes, many younger families moved into the neighborhood necessitating the erection of School #85 in the 300 block of South Arlington.  Completed in 1928, the school was named for music teacher and author George B. Loomis.  Mr. Loomis had published music books for school students and his textbooks were widely used around the United States.  He eventually became Superintendent of Music for all of the Indianapolis Public Schools.

In the third image, taken in 1948, several boys gathered at the front doors of School #85. Some of the boys have been identified as:  Duane Whipple, Bruce Stewart, Jim Kollicher, Jim Burk, Bob Reed, Jerry Semler, Wayman Acres, John Robertson, and Chuck Vogt.


The contemporary images show the school in 2013.  The building has been readapted for offices and is in remarkable shape.  The historic images are courtesy of Chuck and Joyce Vogt.


In the second photo, taken from an article from the Indianapolis News (June 2, 1948, 18), members of the Cub Scout Den 6, Pack 3 troop listen intently to airplane pilot, Carl M. Smith.  All of the boys had the opportunity to ride with him over the city of Indianapolis. The scouts pictured in this article lived throughout the neighborhood.  Pictured:  Dick Ebert, Bob Hecker, Robert Drum, Billy Ebert, David Hecker, Gene Ross, Richard Rich, and Chuck Vogt.  The adults pictured are Carl M. Smith and his wife Mrs. Smith. 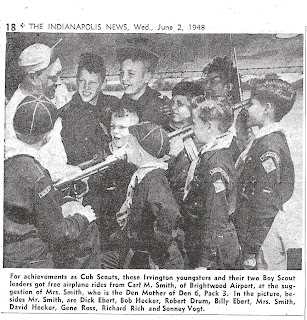 These images are courtesy of Chuck and Joyce Vogt.
Posted by Bill Gulde at 3:10 PM No comments:

Thanks to Larry Muncie, one of our regular contributors to Vintage Irvington, you can now see a previously posted photo with the color enhanced.  The photo, from the Vogt Family collection, is of the new family Buick in 1948.  Behind the car, you can see 5740 and 5802 Oak Avenue.  Thanks to the restoration, you can even see a cloud in the sky.

The Drums dwelled at 5740 Oak Avenue in the first half of the twentieth century.  Edith Drum had a shop in Irvington called Edith's Ceramic Nook.  She also taught fabric painting out of her home.  Mr. Muncie reports that both his mother and aunt took classes from Mrs. Drum

The historic image is courtesy of Chuck and Joyce Vogt.  The color restoration and stories of the Drum family are courtesy of Larry Muncie.

Posted by Bill Gulde at 8:48 AM No comments:

Tall oak trees still grace Oak Avenue in 2013.  Were they planted by residents in honor of the name or was the street named in honor of the existing trees?  Some of the oaks along the avenue may predate the neighborhood.  One giant oak still sits in the front yard of 5729 Oak Avenue and towers over two other properties.  In 1948, Charles Vogt of 5733 Oak Avenue climbed up and onto the tree to do some trimming.  Although the job looks rather precarious to me, you can see the expanse of the branches even then.  I have included views of the regal tree in 2013.  The historic image is courtesy of Chuck and Joyce Vogt.  You may see more images of the tree by clicking on the Vogt Family link below. Walking under these amazing specimens reminds one that the old Chinese phrase rings true:  The best time to plant a tree is twenty years ago.  The second best time is now. 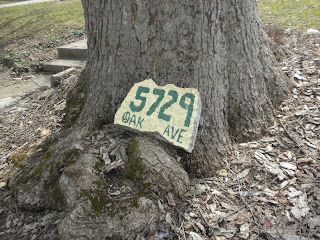 Posted by Bill Gulde at 6:15 AM No comments:

One can only imagine the excitement when Charles Vogt, Sr. pulled into the family driveway at 5733 Oak Avenue to show off his new 1948 Buick.  I could imagine that the entire family likely packed themselves into the car for a drive around Irvington.  At some point, one member of the family--most likely Mr Vogt--grabbed the camera and snapped a color photo of the car.

Although the Buick is the obvious subject of the picture, two houses across the street at 5740 and 5802 Oak Avenue loom in the background.  These beautiful homes had already graced the street since the 1890s and early 1900s.  In 1948, Robert and Edith Drum dwelled at 5740 Oak Avenue.  The Drums had already lived in the house for nearly forty years when this shot was taken.  Next door, J. Gordon and Florence Ramsden lived at 5802 Oak Avenue.


Although the Buick is long gone, the two homes remain important anchors along meandering Oak Avenue.  Both homes have been recently renovated.  The Vogts, Drums, and Ramsdens would have no problems recognizing their homes today.  Contemporary images show the same view in 2013.  The historic image is courtesy of Chuck and Joyce Vogt.
Posted by Bill Gulde at 4:53 PM No comments:

Two interesting homes have graced Oak Avenue since 1920, but the origin of their design and site location still remains somewhat of a mystery in 2013.  The homes are mirrored plans.  In other words, if you pushed the houses together they could form a larger dwelling.  Furthermore, the original builder sited them at angle so that both structures faced a majestic oak tree. (still present in 2013)  Perhaps one clue to the unusual setting may be in the first occupant of 5733.  Walter T. Lents, a local architect, and his wife Clara lived in the home for nearly ten years.  Did Mr. Lents design the properties?  More research is still needed.  5729 sat vacant for two years after its construction.  Charles B. Davis, the Secretary-Treasurer of the Davis Coal Company on Ritter Avenue, was the first to call the twin structure home.  Tragedy struck the Lents family in 1930 when their only child, Mary, passed away.  The couple eventually resettled at 5247 Brookville Road.

By the 1940s and 1950s, Charles and Betty Vogt moved into 5733 and Edward and Madonna Hecker took up residence in 5729.  An examination of the historic photos of 5733 and contemporary images of the two houses reveal that both homes have been changed over the years.  5733 still hosts its original porch columns, but not the brackets along the lower roofline.  5729 does not appear to have the original porch columns, but does have the brackets.  A room has been added in the upper story of 5733 while 5729 still contains an original upper porch with lattice work.  5733 still has its clapboard siding visible, while 5729 is now sheathed in vinyl siding.  Both places no longer have the casement windows in the upper dormer.  Although the homes are in the Dutch Colonial Revival style, the dwellings also had front porches that remind one of a Japanese pergola.  The older photos, taken in the 1940s, certainly reveal what was popular in and on houses of the 1920s.


The top historic images show 5733 Oak Avenue in 1947 and 1948.  The third historic photo was taken of Chuck Vogt's first bike in 1947, but also shows a wonderful view of 5729 Oak Avenue.  The contemporary picture shows both homes on March 30, 2013. The historic images are courtesy of Chuck and Joyce Vogt.
Posted by Bill Gulde at 2:24 PM No comments: