When Irvington artist and illustrator, Frederick Polley (371 South Emerson Avenue), sketched this scene eighty years ago, he probably never envisioned that in time every structure in this drawing would be demolished.  Clearly, the most unique structure on the north side of the 5400 block of East Washington Street was the Irvington Fire House. Notice the the wood shake on the second story and the steep gable.   Carr's Hall, the long building in the center of the print, belonged to Dr. Silas Carr, a local dentist and entrepreneur.  The structured served as an auto showroom on the first floor with offices and meeting spaces on the second story. The building was designed by Marrett L. Carr, the brother to Silas.  Many local artists also displayed their exhibitions in the structure.  Mr. Polley sketched numerous people in front of the building. Perhaps they were there to attend a gallery opening.   Mr. Polley added the very modern touch of an airplane flying overhead.

In the decades following the creation of this print, Irvingtonians and others tore down each one of these buildings, including Carr's Hall as recently as 1999.  I often view the period of time between 1970 and 2000 as the "time of troubles" for the neighborhood.  As people continued to flee for the suburbs, the commercial area along Washington Street struggled. In the early 1990s, citizens allowed the destruction of several buildings for the erection of a Walgreens Drug Store complete with a large parking lot along the street.  In the early millennia, the community added another suburban building housing a grocery store and a dental office.  Developers in both cases added unsympathetic structures that paid no heed to the architectural fabric of the neighborhood. 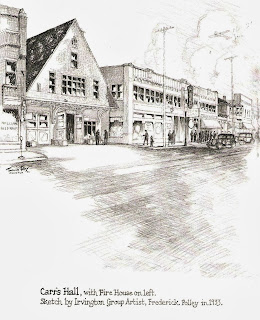 Mr. Polley's drawing ultimately found its way into the Carr-Hildreth collections. Both families generously supported local artists including Mr. Polley.  I am very grateful to Laura Hildreth, the granddaughter of Dr. Silas Carr, for this loaning me this print.  She also managed to save one of the parapets from Carr's Hall after it was leveled.