By the mid-1920s, all of the streets and most of the alleys in Irvington were bricked or paved.  Cycling had been a craze in the US since the late nineteenth century.  Cycling clubs sprang up around Indianapolis and in the neighborhood.  The Vollrath brothers of 218 South Audubon Road actually built a track on a long and vacant lot along Hibben Avenue for a race.  The Indianapolis Star covered the event and reported that Carl Vollrath to be not only the designer of the track, but also the winner of the competition. 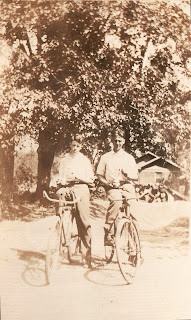 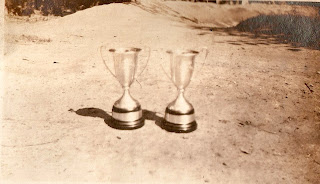 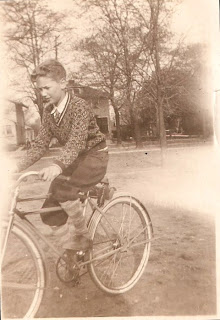 In these historic photos, you can see a photo of Carl Vollrath and his friend Donald after winning the race in 1926.  Their trophies are proudly displayed in the next pictures.  In the last photo, a young Victor Vollrath rides his bike on a vacant lot south of his home at 218 South Audubon Road in 1927.  You can see some of the doubles in the 200 block across the street.  The historic images are courtesy of Dr. Victor Vollrath.
Posted by Bill Gulde at 6:25 PM