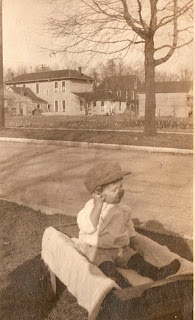 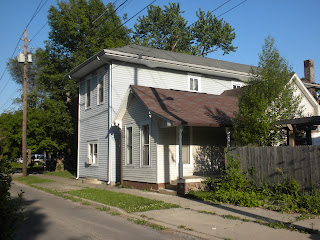 This wonderful photo of baby, Victor Vollrath (218 South Audubon Road), was taken in 1917.  Notice that South Audubon used to be brick!  In the background, you can see the rear of two homes and a business in the 5700 block of Bonna Avenue.  This view is not possible today because homes were built in the field along South Audubon in the 1920s.  Bonna Avenue was named after Bona Thompson, the daughter of a prominent Irvington family.  She was a graduate of Butler and died while on a European tour with her family in 1899.  The Thompsons later donated the land and money for a library at Butler with her name on it.  Yes, the town elders misspelled her name for the street.  The depot for Irvington used to sit across from the structures in this photo.  All of these buildings are still standing in 2012 although in various states of repair.  I have included a frontal view of two of the Bonna Avenue structures in 2012.
Posted by Bill Gulde at 7:20 PM