Victor and Marie Vollrath mow the front yard of their home at 218 South Audubon Road in 1927.  The Vollraths prided themselves on their beautiful yard.  They were also known for their gorgeous roses.  In this wonderful photo, you can see storefronts in the 200 block of South Audubon Road.  Upon Irvington's founding in 1870, this was to be the commercial area for the neighborhood because of its proximity to the Baltimore and Ohio Railroad; however, by the 1910s Washington Street took over as the most important business avenue for Irvington.

Behind Mrs. Vollrath and her son, you can barely see the Wallace Grocery in the left of the photo.  For a brief stint in the 1920s, there were three grocery stores in this block including the Charles Vollrath Grocery at 202; the  William Jones Grocery at 203; and the William Wallace Grocery at 212.  If you look closely behind Mrs. Vollrath, you can see the F. E. Lederhaus Barber Shop.  You will note the barber's pole by the front door.   Other businesses to operate in these nearby shops in the early 1920s included a drug store at 203 South Audubon, run by Gilmore Morgan (his family lived across the street at 214 South Audubon), and Keene's Radiator Shop (205 South Audubon).  Dr. Victor Vollrath, who is 95 as of this writing, remembers getting his first haircut at Lederhaus Barber Shop.  His mother kept his hair bobbed until he was five years old, but she finally relented to his request to have a proper haircut in 1921. 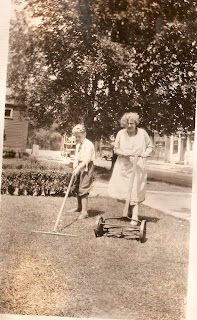 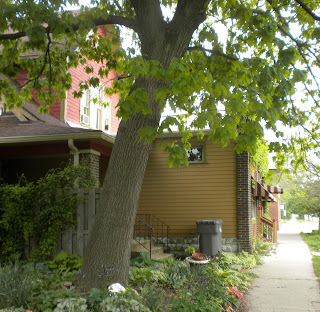 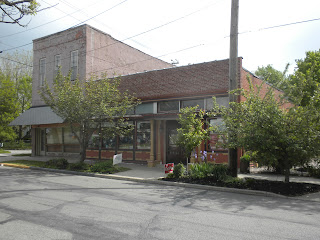 In the contemporary photos, taken in the spring of 2012, you can see the same view of Wallace Grocery at 212 South Audubon Road and of the shops across the street that housed the drug store and radiator shop.  The historic image is courtesy of Dr. Victor Vollrath.
Posted by Bill Gulde at 7:15 PM