Before there was a Hinkle Fieldhouse... 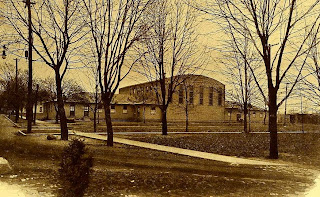 During Butler University's tenure in Irvington, many mainstream sporting events grew in popularity. Basketball took longer to take root as baseball and football remained enormously popular. After World War One, campus officials took over the former Student Army Training Corp barracks for a new gym. The college finally had a larger venue for indoor sports like basketball. The building was completed around 1918 and was located on the southwest corner of University and Ohmer Avenues. Ten years later, the college completed the famed Hinkle Fieldhouse at the new campus at Fairview in northwestern Marion County.

In the historic photo, taken in 1922, you can see the historic gymnasium. The photographer was actually standing on the campus as you can see that University Avenue used to dead end into South Butler Avenue. In the distance, you can see the double located at 5317-19 University Avenue. In the late 1930s, local officials saw to the demolition of most of the structures on campus after Butler moved away, including the old gym. In the early 1940s, a developer built several smaller homes on the site. You can see the same view, taken 90 years later, in the contemporary image shot on April 12, 2012.
Posted by Bill Gulde at 4:47 PM