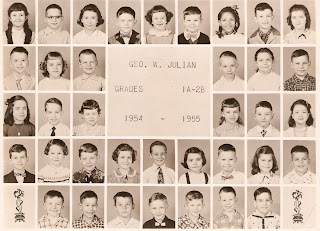 Look at all of these toothless, cute, pigtailed, and innocent children. They all attended School #57 (George Washington Julian School) at East Washington Street and South Ritter. Many of them will be retiring soon, and perhaps some are not with us anymore. Several of their fathers and some of their mothers fought in World War II, while most of their moms stayed home and kept the U.S. moving forward by working in factories, shops, government agencies, and schools. Some of these children were drafted or volunteered for the Vietnam War. Much has happened to them and to the country since 1954.

They dared to defy their parents by listening to rock music. They witnessed the Civil Rights movement, and perhaps they turned off their television sets during the Watergate Scandal. They thought they might be killed by an atomic bomb and they viewed the fall of the Berlin Wall on a new cable TV channel called CNN. When this photo was taken, most likely in the autumn of 1954, Dwight Eisenhower was the President of the United States, and George Craig was the Governor of Indiana.

So much has happened to Irvington since 1954 as well. A new mall called Eastgate opened in 1957 and lured many local shops away. Some residents left the neighborhood for greener pastures in the suburbs, where they could build a long ranch house on a large lot. Those who chose to remain in Irvington watched as Washington Street business owners began to struggle and close up their shops in the 1970s and 1980s. In their later years, they have watched a Renaissance transform part of that street by 2012.

For those who moved away never to return to the neighborhood, they take with them their memories of playing in Ellenberger Park; watching a movie at the Irving; or perhaps buying candy at the local soda shops or corner grocery stores. It is possible that as I type this note, the "kids" in this photo are busy telling their grandchildren stories of this place called....Irvington.

This historic image is courtesy of Janet Hunt Wilzbacher. She is the cute little girl located fourth from the left in the fourth row. If you recognize the faces of any other children in this photo, then drop me a note and we shall add them!