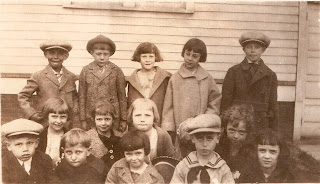 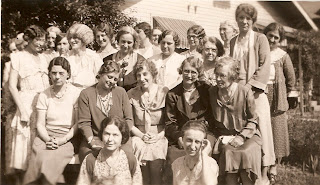 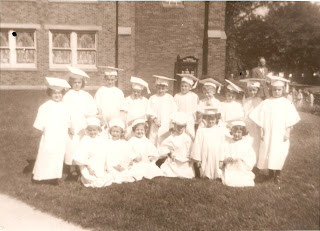 The Emerson Avenue Baptist Church has been a part of the Irvington area since 1913 and on the northwest corner of Emerson Avenue and East New York Street since 1921. The current structure at 306 N. Emerson was remodeled in 1958. All of the photos posted today are images of various Sunday school groups from the 1920s, 30s, and 40s. If you recognize any of the folks in the photos, drop us a note so that we can identify them!

In the top photo, a group of Sunday School kids pose for a photo in 1921. The only child identified in this photo is Evelyn Schneider, who is the third child from the left in the bottom row.

In the middle photo, a women's group affiliated with the church, pose in the backyard of someone's home. The photo was likely taken around 1930. The only person identified is Myrtle Schneider, who is seated on the ground in the front row and at the left. It is possible that she was hosting the event at 327 Poplar Road.

In the bottom photo, members of a graduating Sunday School class pause for a photo in October of 1949. Note that the church used to be brick. Today it is clad in stone. A very young Bill Ferling stands in the top row of the photo. Mr. Ferling also graciously loaned the photos for this post.
Posted by Bill Gulde at 5:36 PM