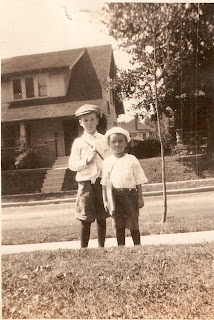 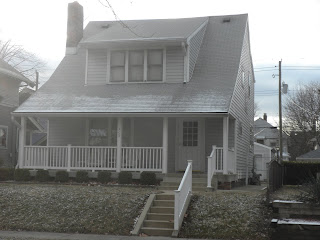 Bob and Tom Ferling posed for their mother in September of 1920, before going off to school at School #58. The boys were the sons of George and Rae Ferling, who dwelled at 311 North Bosart Avenue. The home seen behind the kids is across the street at 308 North Bosart. The Bosart family owned quite a lot of land just west of Irvington. The Bosart Family farmstead is still standing at the northeast corner of East Washington Street and Bosart Avenue. Much of their land was redeveloped in the early twentieth century for these homes. The Russell family lived across the street at 308 North Bosart Avenue in 1920. The contemporary photograph shows the same image in 2012. The house has been altered since the historic photo was taken. The historic image is courtesy of Bill Ferling.
Posted by Bill Gulde at 7:53 AM